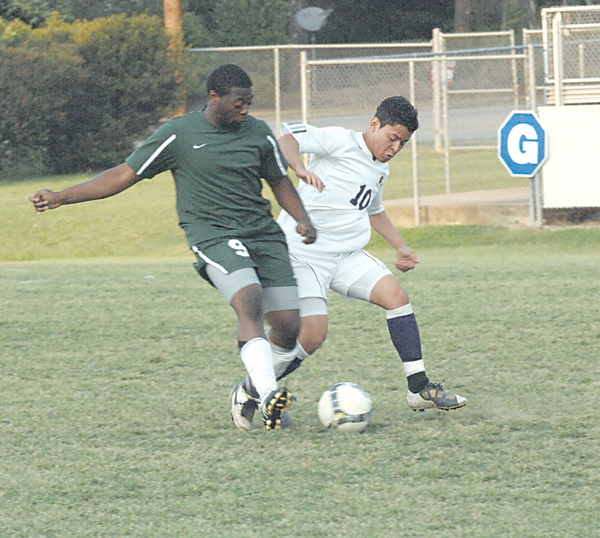 Alex Benjarano, in the white, tried to wrestle the play away for the Bearcats.

The Bearcats’ victory, coupled with a Thomas County Central Yellow Jackets victory over the Lee County High School Trojans, gives the Bearcats the number one seed in the Region 1AAAA South Sub-Region Tournament, which will be held April 12 and 13 at a site to be determined.

Provence scored in the 6th minute after dribbling past several Indians players and putting a hard shot on goal.

His second goal came in the 12th minute after taking an assist from Benjarano right in front of the goal.

Clement scored his first goal on a shot from the top right-hand corner of the box in the 18th minute.

Benjarano scored in the 16th minute after taking a crossing pass from senior midfielder Bryan Ordonez. Minutes later, senior forward Miguel Barron scored on a corner kick played in by Clement after the Indians goal keeper mishandled the ball. The Bearcats had a 5-0 halftime lead.

In the 42nd minute, Benjarano intercepted a goal kick and blasted in a hard shot to increase the Bearcats’ lead to 6-0. Clement got his second goal in the 56th minute, firing a shot into the lower corner of the goal from 25 yards away.

Senior forward Adam Taylor scored a breakaway goal in the 73rd minute after Clement played a ball to his feet after a direct kick.

After the game, Coach Ard praised his teams progress.

“We have been talking a lot lately about the players not being satisfied and getting better with every game,” he said. “We did that for the most part Friday night.

“We made progress as the players worked the ball through the midfield. That spreads the opponent’s defense.

“Defensively, we had trouble with our organization and marking. That was probably my biggest concern following the match.

“I’m thrilled that we won the Sub-Region but we cannot be content. We must reach for higher goals and work hard to achieve them.”