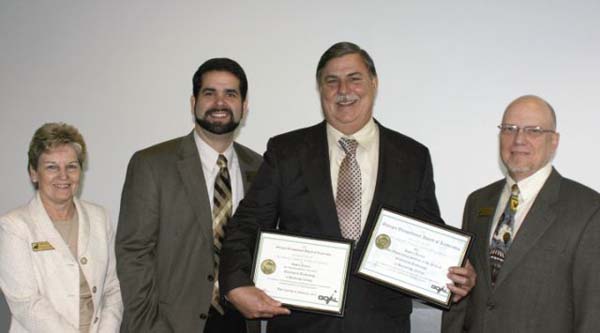 He competes in regional competition Thursday, March 24, with his eye on the prize of being the state winner selected in May at the GOAL Conference in Atlanta, said Sheila McLendon, BC’s GOAL program coordinator.

Turner, who owned and operated Turner Small Engine Repair in Blakely, is a lock operator trainee with the U.S. Army Corps of Engineers.

He was nominated by BCEC Instructor Claude Bell of Blakely and was selected from a field of 11 students, who represented both BCEC and Bainbridge College’s main campus. Instructors in the Technical Studies Division at both facilities nominated students in their respective technical programs.

The nominees were judged by a selection committee of leaders from the business and industry communities in Decatur, Early and Seminole counties. The judges reviewed each instructor’s nomination and conducted personal interviews of the students. They considered the student’s academic achievement, personal character, leadership ability and enthusiasm for technical education.

Each nominee gave a brief formal presentation before the judges interviewed them. Students spoke about their aspirations and what technical education means to them during the competition at Miller County’s Family Resource Center in Colquitt.

“The purpose of the GOAL program is to spotlight the outstanding achievement by students in Georgia’s technical colleges and to emphasize the importance of technical education in today’s global workforce,” said McLendon, adding that the program honors excellence in academics and leadership among students in the 26 colleges in the Technical College System of Georgia and the two in the University System of Georgia, including BC, that have technical education divisions.

Three students from each of the three regions will be selected as semi-finalists and will be announced in May at the state GOAL conference in Atlanta, where all college winners will participate in the annual conference. The nine regional finalists will then compete at the conference for the state title.

The student who earns the state title has the responsibility of traveling throughout Georgia as ambassador for technical education. To make that travel easier, the winner receives a new Chevrolet Cruze from Chevrolet, the corporate sponsor of Georgia’s GOAL program.