Employees of the Decatur County School System, as well as the system itself, can expect a significant increase to health insurance premiums during the next fiscal year, starting July 1.

The State Health Benefit Plan, Georgia’s self-insured benefit plan that covers state employees, including teachers, is expecting a $250 million shortfall next year and plans to close the gap by increasing premiums, to both the employers and employees.

That unexpected news was part of a glimpse of the school system’s forecasted budget given to the Decatur County Board of Education Thursday night. And the forecast was not pretty.

The state has informed school systems that premiums for non-certified, non-teaching employees would increase by 51.3 percent, or $1,000, per employee annually. In total, the change would add $240,275 in expense next year.

The increase for certified employees (teachers), the majority of the staff of the school system, has not yet been shared with the system. But, the expectation is that the increase will be the same, if not higher, than for the non-certified staff.

“The increase for certified employees has been a tight-lipped secret from everyone at the state,” Matthews said. “We can’t find out from anyone and that means its (the increase) not going to be pretty.”

“This is one adjustment that we have absolutely no control over. None whatsoever,” said Superintendent Fred Rayfield. “The state has decided to try to recover today from a hole that has taken years to dig. The certified number is going to be so big, and so staggering, that they will keep that number close to the vest until this legislative session is over.”

The increase in benefit costs, combined with an additional $220,000 in the pre-kindergarten program costs shifted away from the state and the absence of $455,000 in funds from the American Recovery and Reinvestment Act will lead to the projected $1.9 million gap. But, that gap does not include the increase in certified employee health benefits.

The forecasted revenues for fiscal year 2012 are $36.13 million and the forecasted expenses are $38.04 million.

Matthews provided the board with a summary of funding cuts in total over the past three years, and the associated jobs eliminated during that same time. The local system has lost a little more than $10 million, or 24 percent, in funding and has reduced the total workforce by 66 positions, or 10 percent of the total employment of the system.

As state funding drops, local input climbs
The recent announcement from the State of Georgia that the Decatur County School System and its employees will incur a huge increase in health benefit costs continues a trend of eroding state financial support to public education. In the last 10 years, total allotments of state funds to the local school system have fallen by 25 percent on a per student basis. Local revenues (property taxes) have been used to offset the loss in state funding, but this source is being strained by the decline in property values. Source: Georgia School Funding Association. 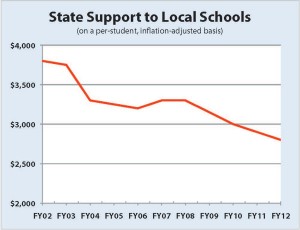 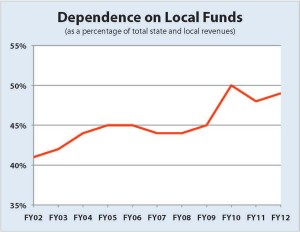