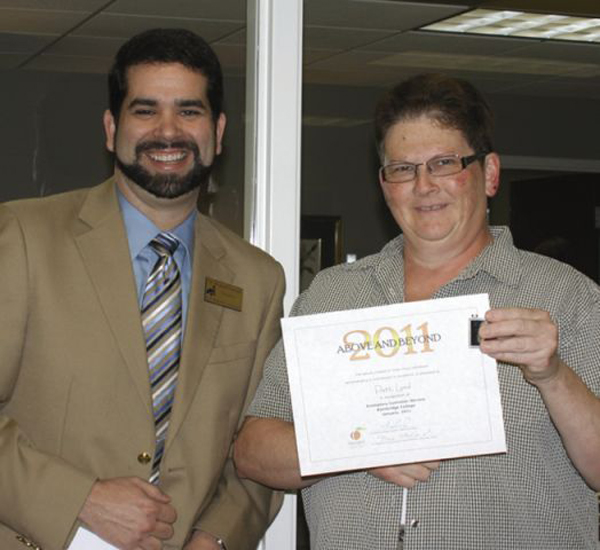 BAINBRIDGE COLLEGE mathematics professor Patti Lord of the Learning Support Division shows the certificate she received from President Richard Carvajal that recognizes her for outstanding customer service. The BC alumna was nominated for the Customer Service Award by a student, who praised her outstanding teaching. Lord was the first Customer Service Award recipient since Carvajal started his tenure in January.

Bainbridge College mathematics professor and BC alumna Patti Lord has been honored for outstanding customer service.

An associate professor of mathematics in the Learning Support Division, Lord received a Customer Service Award certificate and Above and Beyond pin. She is the first employee to receive the honor from President Richard Carvajal, who started his tenure in January.

Interim Vice President for Academic and Student Affairs Tonya Strickland, who serves as champion for BC’s Customer Service initiatives, noted that a student made the nomination and shared this quotation from the nomination: “She is dedicated to her students and takes time out to help with anything. I have learned so much from Ms. Lord, and she has made math one of my favorite subjects. I have so much more confidence going forward with my other classes, and with Ms. Lord’s help I feel more accomplished now as a student.”