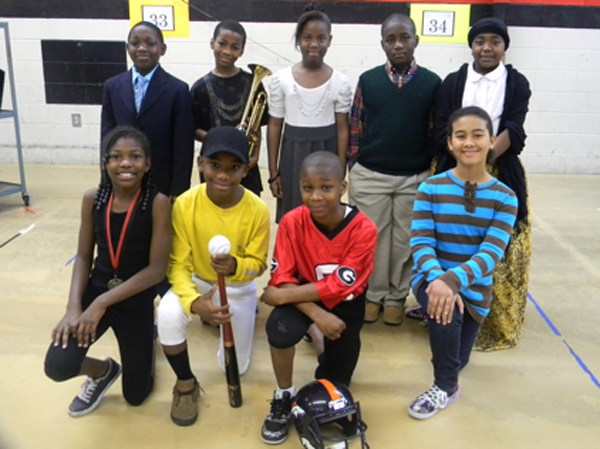 Students at John Johnson Elementary celebrated “Famous African-Americans from the Past, Present and Future” during its monthly “Rally Around the Flag” celebration. The JJE students pictured above were chosen to portray a famous African-American who displayed outstanding character and worked hard to reach a personal goal or dream. These students spoke before the entire student body and dressed in appropriate clothing to represent their character. As they spoke, a PowerPoint presentation ran behind them portraying the name and a photograph of each character. To end the program, Haile Love, JJE Student Council president, spoke as the famous character of the future. She shared her dream of becoming an anthropologist. She stated that she “looks forward to studying and researching the origins, culture and social relationships of human beings.” In the end, all of our characters had one question for their audience, “What will your dream be?” The students, and who they represented, are, from the left, front, Dominique Linzy (Wilma Rudolph), Calvin Bowen (Jackie Robinson), Robert Freeman (James Butler) and Haile Love; back, Timothy Anderson (Martin Luther King), Travis Richardson (Louis Armstrong), Jalisa Walker (Maya Angelou), Jordan Sweet (Bill Cosby) and Dalyah Minor (Harriet Tubman).