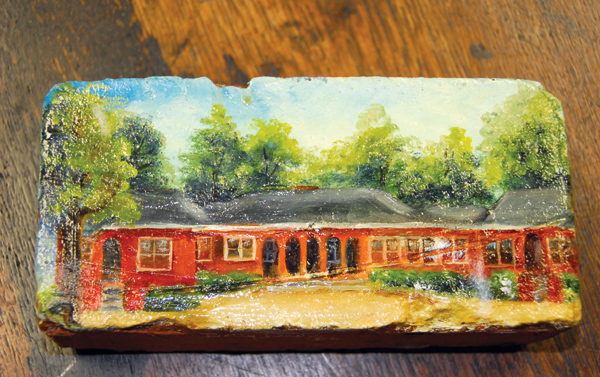 A PORTRAIT OF BRINSON’S PAST, the old Brinson School is mostly gone, after fire badly damaged it, but lives on through the paintings of artist Betty Earp Davis, who captured the school with oil paint on canvas and this brick.

Two alumni of the old Brinson School in northwest Decatur County are trying to help preserve some of its history by putting a painting of the school on public display.

To most folks passing through, Brinson—population of about 292—is pretty quiet. However, at one time in the early 20th century, it was home to a bustling railroad station, sawmill and even a public school.

Winston Pearson and Betty Earp Davis were two members of the Brinson School’s Class of 1948.

At Pearson’s suggestion, Davis made a beautiful oil painting of the schoolhouse for the Class of 1948’s first and only reunion in 1985. James “Billy” Lane won the painting in a drawing and displayed it in is home at the Lane Farm in the Cyrene community until his death.

In 2004, Pearson bought the Lane Farm and June M. Lane, Billy’s widow, gave the painting to the new owner.

Pearson said he believes the painting reflects part of Brinson’s history and feels it is significant to the former students of the Brinson School. Therefore, he has donated the painting for display in the Brinson Town Hall.

The brick schoolhouse was in operation from its construction in 1923 through the 1960s. It operated for a few years as the private Oaks Academy. Sometime after the reunion of 1985, the schoolhouse was badly damaged by fire.

Part of the school house—located at 150 Hodges St.—was salvaged and converted into a residence that is occupied today, while bricks from the damaged part were sold and scattered.

Davis said a friend of hers gave her six bricks. She created oil paintings on the bricks to give to classmates at later school reunions. There were six bricks in all, including the one she has and another she gave to a classmate as a wedding gift.

Davis has painted a number of other paintings of local historical places on canvas and found items such as a used cross-cut saw blade. Although she is recovering from a stroke she suffered this past October, Davis still teaches art lessons from the private studio behind her house in the Bethany community.

For years, she has painted watercolors of Brinson landmarks that are no longer standing for display at the annual Brinson School reunions.

“It gives us entertainment,” Davis said. “It brings back memories of things that happened and people get to telling tales.”

One such painting was of the old wooden train depot, built in the late 19th century, when Brinson became a shipping point for farm products, lumber and naval stores, according to the Historic Chattahoochee Commission. The town, first settled in the 1850s, began to decline when sawmill operations closed between 1910-1920.

Pearson, who rode a fairly modern school bus to the Brinson School, recalls seeing the bus students rode in the school’s early days.

“It had a wooden top but no sides,” Pearson said. “You would see a bunch of youngn’s hanging out the side. There were no windows but there was a roll of canvas that could be pulled down if it rained.”

Counting Pearson and Davis, there were 18 members of the Class of 1948.

Davis can be contacted at 246-3561. Anyone interested in donating old photos or artwork of Brinson for display can contact Town Clerk Sherrie Bowers by calling 248-1752. 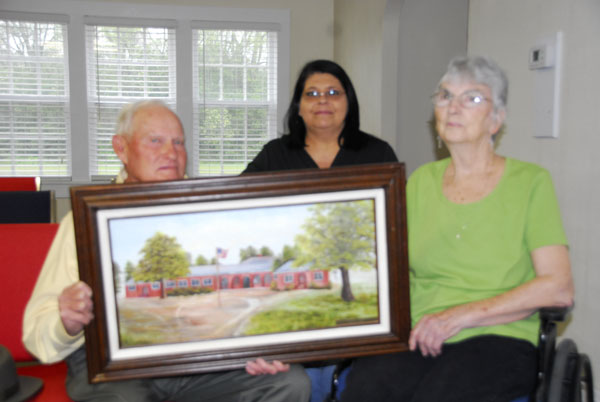 BRINSON MEMORIES are shared by alumni of the Brinson School, including Winston Pearson and Betty Earp Davis, who graduated in 1948. Pearson donated Davis’ oil canvas painting of the school for display in the town hall. From the left, are Pearson, Brinson Town Clerk Sherrie Bowers and Davis.

Parents may stress the concept of personal safety to their children, but for some kids, the idea of “don’t touch... read more