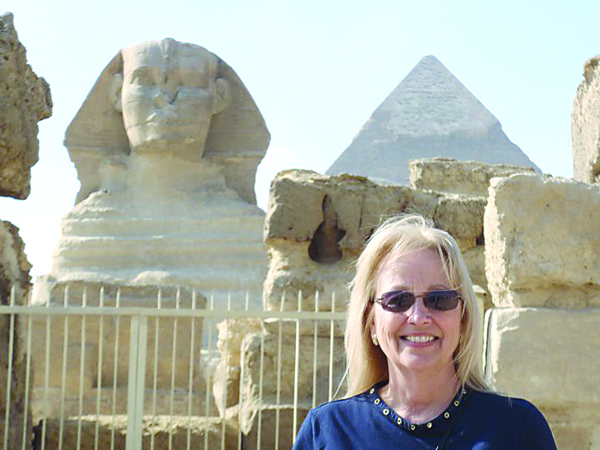 ANCIENT EGYPT depicted by the Sphinx and the Great Pyramids is enjoyed by Georgia Gruber. 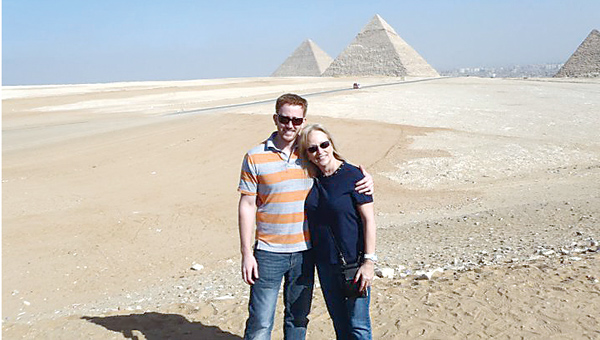 GEORGIA GRUBER and son, Matthew Goulding, stand out in the large sandy expanse with Great Pyramids in the background.

Bainbridge resident Georgia Gruber was excited to be taking the dream trip of her lifetime when she left Dec. 12 to join her son, Matthew Goulding, in Barcelona, Spain, where they would board a ship for a 21-day cruise around the Mediterranean.

Gruber reasoned that if she was going to get to see her son at Christmas she would have to go where he was.

Since childhood Gruber has had a strong interest in anthropology and archeology, has made a study of things Egyptian, and had a life-long desire to see the Pyramids. She had that experience while also having a first-hand view of some of the unrest that has boiled over in parts of Europe and the Middle East in recent weeks.

First port-of-call was Rome. The group had just finished a visit to the Vatican. They were walking toward the government buildings when they discovered they were headed right between two groups of protesters. Television cameras were rolling and they were advised to get out of the area.

“We ran,” said Georgia, who described how they jig-jagged six to eight blocks to avoid the rioting. “I was determined to see the Coliseum before I left Rome.”

When they heard a big concussion they turned around and saw smoke. They soon learned a car bomb had gone off in the area they had just left.

“We quickly saw the Coliseum, then took off for our ship.” They made it to the ship OK, but found it was delayed in departing because one of the tour buses had been caught up by the rioters, who rocked the bus they were on.

Their second port-of-call was to have been Athens, but the ship captain announced there had been a change in plans due to the rioting. Instead, they went to Crete, which she described as “wonderful.” They spent one day there and throughout their visit were warmly welcomed by the citizens. They were unexpected visitors, but the people met them at the boat and were very gracious hosts, as Georgia thinks they welcomed the income brought by tourists.

Next they went to Turkey to Izmir and to Ephesus where they saw the house that Mary lived after the death of Jesus.

They also visited a government-owned silkworm farm where they watched how silk thread is derived and spun from the processing of the cocoon. The silk is used in oriental rugs. The government has initiated a training program to teach young women a skill they can take back to their villages and make a living while carrying on a national tradition.

Alexandria, Egypt, was the next port. They traveled by a small van 2-1/2 hours to Cairo from there. Part-way between Alexandria and Cairo they were pulled over to wait for a police or military escort. Vehicles lined the highway waiting to reach a certain number, then went in a caravan. Even Egyptians seeking protection got in line, but it was mostly tourists.

Georgia’s first impression of Cairo was of the intense poverty. She described seeing slums, broken windows, defaced buildings, garbage in the streets. This was about one week before the rioting began in Egypt with the first bombing.

“We were still on ship when the first Coptic Church was bombed.” recalls Gruber.

Her second impression of Egypt was of the enormous traffic and the chaos as vehicles traveled in no organized lanes, or used signals.

“People were milling about everywhere. We could feel the tensions in the country,” she added. “We knew something was about to happen in Egypt. It was a Monday and the streets were filled with young men just milling about.”

She described one very stressful situation on the return trip to Alexandria to get back on board the ship. The van had changed drivers and the new driver picked up a stranger off the side of the road. The two proceeded to converse in their own language, and appeared to not understand English. When they came to the area of the ship, the driver went right past the point he should have dropped them off. “We were afraid we were being kidnapped,” explains Georgia, who said they had to threaten and bribe the driver to turn the vehicle around and take them to the ship, which was scheduled to leave port in 10 minutes.

Her first glimpse of the pyramids was just the tip of it at which point she said she became very emotional.

“I never thought I’d ever see this in person.” she explained. As she came closer she saw all the vendors surrounding the area and was dismayed by the commercialism of the place, as well as all the camel and donkey dung. “They charged for everything, including toilet paper in the government bathrooms,” she adds.

However, she was soon pleased to learn she could climb on the pyramids and had her picture taken there. She also was able to see the Sphinx, but could not get close to it, as she said it is deteriorating.

Anther day was spent on a Nile River cruise and a trip to an Egyptian museum where she saw the sarcophagus of King Tut.

“It was magnificent,” she exclaims.

She recalls the morning they were to dock in Morocco it was announced that the citizens of eight different countries, (Philippines and Indonesia among them) were refused entry. This included staff members of the ship who were of those nationalities. “They were not cleared to go through customs and disembark there.”

She saw the King’s palace and Rick’s Cafe, rebuilt from the movie “Casablanca.” They also toured a mosque there, the only one they were allowed inside. She described it as magnificent.

They also saw the Casablanca palace of King Abdulla of Saudi Arabia, who owns a palace in across from the beach. They were told that you could tell when he was in residence there as armed guards surrounded the palace.

The latter days of the cruise were even more pleasant. A day was spent on the Island of Malta, which she described as absolutely beautiful, neat, clean and well cared for. They returned to Barcelona to disembark all the people who were not going on the second phase of the cruise.

Georgia’s group continued to the Canary Islands. They passed through the Straight of Gibraltar, seeing it lit up at night, then spent a day at the beach in Las Palmas, where they met many Scandinavian people on holiday.

They returned through the Straits to Funchal on the Isle of Madeira, again a beautiful spot.

Georgia says of her trip, “How lucky I am that I was able to fulfill a life-time dream. That country may be closed to westerners some day in the future.

“I am glad to be back home. As Dorothy so wisely states in The Wizard of Oz, ‘There’s no place like home.”