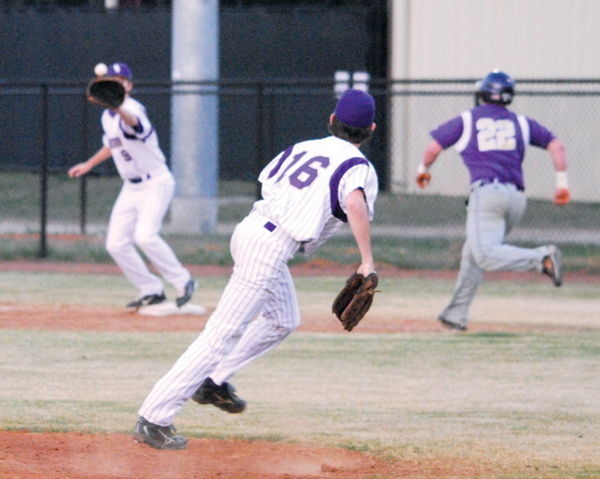 Third baseman Blake Voyles blasted a two-run home run over the right field fence in the bottom of the third inning here Thursday to lead the Bainbridge High School Bearcats to a 3-1 victory over the Marianna (Fla.) High School Bulldogs.

BHS left-hander Marty Anderson went all the way to pick up the victory.

Center fielder Stephen Lightfoot, who drew a one-out walk, was aboard when Voyles connected.

First baseman Gunnar Griffin singled with one out in the bottom of the fourth before being erased by an inning-ending double play.

The Bulldogs cut the Bearcats lead to 2-1 when they pushed a run across in the bottom of the fifth.

Chris Godwin singled to open the Bulldogs’ fifth and came in on a two-out RBI single to center by Brandon Burch.

The Bearcats scored their third run in the bottom of the sixth. Shortstop Sutton Reece led off the inning with a walk and went to second on a wild pitch. Shortstop Steven Bench singled to right, driving Reece home.

The Bulldogs threatened in the top of the seventh but Anderson bore down to get out of the jam.

After designated hitter Zack Smith grounded out to Anderson, Chris Godwin singled to right and right fielder J.T. Meadows grounded out to Reece as Godwin moved up to second.

Anderson then bore down to strike out Dustin O’Haire to end the game.

The Bearcats will return to action today when they travel to Chipola College in Marianna to take on Liberty County (Fla.) High School at 7 p.m.

They will travel to Cairo Tuesday for a 6:30 p.m. game with the Cairo High School Syrupmakers at Cairo’s Jackie Robinson Field.

On Thursday, the Bearcats will have a rematch with the Bulldogs in Marianna and on Friday, they will open their Region 1AAAA schedule against the Warner Robins High School Demons in Warner Robins.