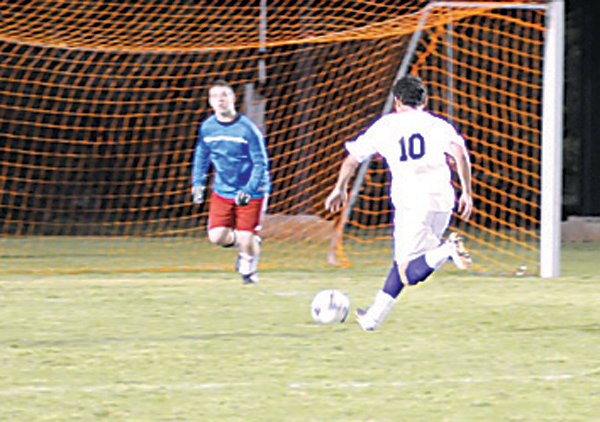 On Thursday, the lone and winning goal was scored by Hal Clement in the 25th minute. He took a through pass from Louis Mejia and beat the Central defenders and goal keeper with a hard shot on goal.

Following the Central victory, Coach Ard talked about how proud he was of his team.

“I have never been so proud of one of my teams as I am this one,” he said. “This is a major accomplishment. It feels really good to beat a quality side like Thomas County Central.

“They are a classy bunch and they are very talented.I have nothing but respect for their coach, their players and their program.

“It was good to go over there and finally come home with a victory after so many years trying to secure one.”

Alex Benjarano got the scoring started in the third minute of Tuesday’s game when he took a long pass from Bryan Ordonez and put the ball in the back of the net.

In the seventh minute Tuesday against Brooks County, Hal Clement took a short corner kick from Louis Mejia and put what Ard described as a beautiful shot on goal from an impossible angle to make it 2-0.

Benjarano beat the Trojans goal keeper, who had come out of the goal, to the ball and shot it back across the face of the goal and into the net in the 12th minute to make it 3-0.

In the 15th minute, Clement took a ball played into the goal area by Carlos Becerra and chipped it into the net to put the Bearrcats ahead 4-0.

Clement scored his third gal in the 20th minute to improve the Bearcats lead to 5-0. He shot the ball in from the right after taking an assist from Mejia.

Mejia made it 6-0 just before halftime when he kicked in what Ard called a laser-like shot from about 35 yards away.

The score moved to 7-0 in the 66th minute when Benjarano took a pass from Mejia and kicked the ball into the net.

Freshman Daniel Provence got his first goal as a Bearcat in the 70th minute, when the Trojans’ goal keeper mishandled the ball on the goal line, making it 8-0.

The advantage moved to 9-0 when Miguel Barron took a crossing pass from Mejia and put it into the net in the 71st minute for his first goal of the year.

The final goal, by Paul Soden in the 77th minute, was his first goal as a Bearcat.

Ard said he was pleased with his Bearcats’ effort against the Trojans, pointing out that they moved the ball around well and played good pressure defense.

“I was a little concerned after a lackluster Monday training session, but the guys really put that behind them and game out with great intensity and focus,” he said. “We need that kind of intensity for our remaining games this season.”