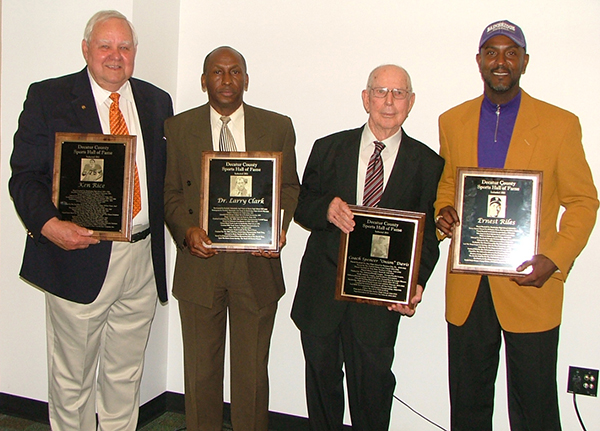 Four men who were outstanding in their sport and a positive influence on untold numbers of Decatur County young people’s lives through the years became the first inductees into the Decatur County Sports Hall of Fame Saturday night. 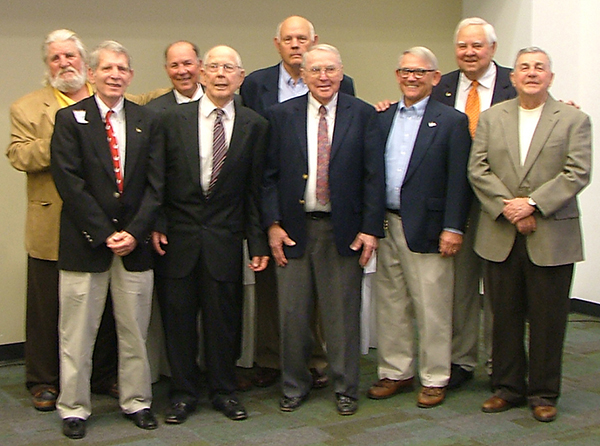 In his remarks, coach Davis, who was also an outstanding minor league left-handed baseball pitcher, and led the Bearcats to a perfect 10-0 regular season record and Region 1AA championship in 1960, emphasized that everyone has got to have a goal that they respect and go after it.

His outstanding 1960 running back tandem of fullback Fred Barber and halfback Ed Varner were on hand to congratulate him.

Clark stepped down as head track coach in 2006 and turned the track program over to one of his former top sprinters Larry Cosby. 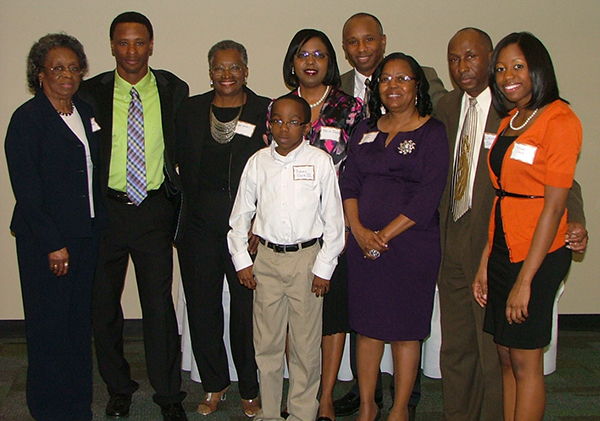 The second annual Larry Clark Invitational track meet, which is named in his honor, will be Saturday, March 12, at the Bainbridge High School Track.

Clark recalled how Ralph Jones, who gave the welcome Saturday night, asked him to join his varsity football coaching staff when he was named Bainbridge High School Bearcats head football coach and athletic director in 1981.

“After coach Jones asked me to join his football staff as a defensive backfield coach, he dropped something else on me,” Clark said. “He asked me to become head track coach.”

Clark also coached hurdler Ty Akins, who earned All-American honors with the Auburn University Tigers track team and is now running the hurdles in professional track meets around the world.

The 2003-2004 Bainbridge High School male senior athlete of the year, Akins won the 60-meter and 110-meter championships his senior season. He was also a wide receiver on the Bearcats football team.

Riles, who played for coaches Rick Anderson, Doug Tucker and Stan Killough with the Bearcats and hit the 10,000th home in the history over the Giants franchise in New York and San Francisco, said “God blessed him by guiding him to the right place at the right time.” 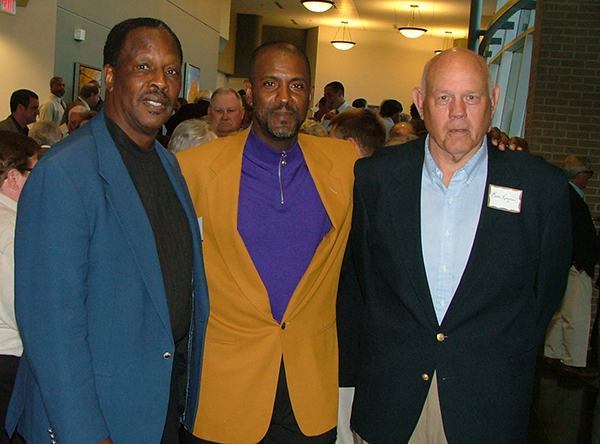 DECATUR COUNTY SPORTS Hall of Fame inductee Ernest Riles, center, renews acquaintances with a couple of old friends. On the left is Tomie Reynolds, Riles’ third base coach when he played with Oakland Athletic, and on the right is Ben Rogers, his athletic director when he led the Middle Georgia College Warriors to consecutive Junior College World Series championships.

“My high school coaches and my Middle  Georgia coach Robert Sapp all taught me a lot of baseball as a youngster,” he said. “The work ethic they taught me helped me get to the big leagues.”

When the Brewers drafted him in 1981, they sent him first to a minor league team in Butte, Mont.

“I experienced a kind of severe cold weather that I had never experienced before, but I persevered and made it to the major leagues.”

He told the audience Saturday night that his induction into the Decatur County Sports Hall of Fame meant more to him than any other recognition he had received. 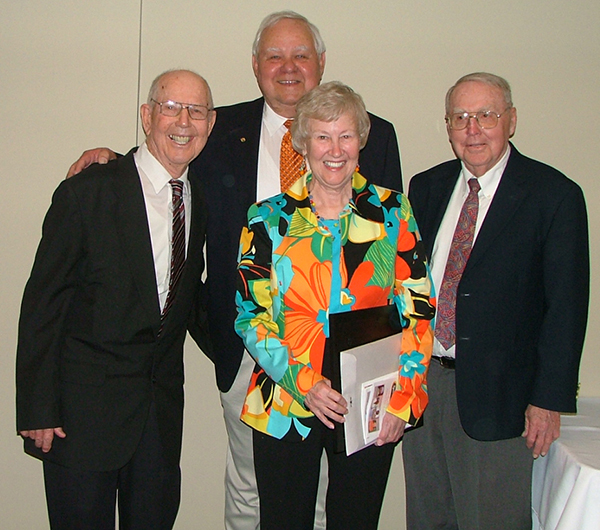 “I am very humbled tonight,” he said. “The other awards and recognition’s are great honors, but this is home and going into the Hall of Fame with coach Davis is really special. He is an outstanding man and role model for me and many others he has touched.”

The award is given annually in memory of Auburn’s three-time All-American center who went on to become vice president of Texaco’s European Oil Operations. 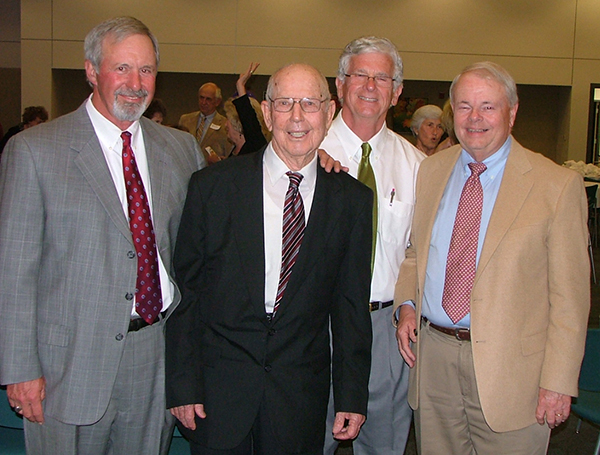 DECATUR COUNTY SPORTS Hall of Fame inductee coach Spencer “Onion” center, has a happy reunion with three of his former Bainbridge High School Bearcats football players. Ed Varner, left, and Fred Barber, third from left, were the starting halfback and fullback on his 1960 team that had a perfect 10-0 regular season. On the right is his former Bearcat offensive tackle Henry Metcalf.

Decatur County Board of Commissioners Chairman Butch Mosley congratulated the honorees on behalf of the board.

Decatur County Sports Hall of Fame board of directors President Steve Bench announced that the Hall of Fame’s permanent home where the plaques of the four inductees and future inductees will be displayed is at the Bainbridge Area Convention and Visitors Bureau Visitors Information Center.