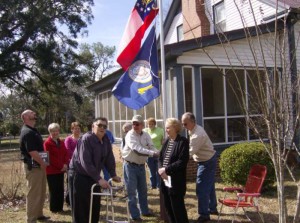 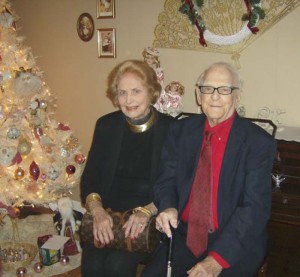 On Feb. 15, one of the first warmer, bright and sunny mornings of the New Year, a gathering of friends met at 11 a.m. on the front lawn of “Hamilton Hall,” the home of retired Navy Lt. Comdr.. and Mrs. Lee Monroe Hamilton.

The assembling was to celebrate the 94th birthday of “Mr. Lee,” as he is fondly known in Climax.

The gift presented by friends Tony and Louise Williamson was a new U.S. flag, sponsored by Woodmen of the World, a new Georgia flag, sponsored by Wallace Sholar, and the flag for the retired U.S. Navy commander, sponsored by U.S. Rep. Sanford Bishop. The flags replaced the three weather-tattered flags Mr. Lee proudly displays on the front lawn of their home.

Mr. Lee has been very active until a recent illness. On this date he watched from the screened veranda due to these health problems as Tony Williamson presented the flags to his wife, Mrs. Pearle, in his honor. Other friends attending the ceremony as the flags were raised were June Mosely, Missy Lambert, Danny Lambert, Sam Sirmons, Fannie Wells, Louise Williamson and Jean Ouzts.

Mr. Lee was born in Dade City, Fla., on Jan. 5, 1917, and attended school in Jasper, Fla. He graduated from the University of Florida Engineering School as a chemical engineer and served 23 years in the U.S. Navy.

He spent most of World War II in the South Pacific and retired from the Navy in 1963. He taught chemistry at a private school in North Georgia for 20 years, retired again to Clearwater Beach, Fla., for another 20 years. He and his wife now reside at “Hamilton Hall” on Broad Street in Climax, his wife’s hometown.

The Hamiltons are members of the First United Methodist Church in Climax, and have one son, Kenny, and daughter-in-law, Melissa, who reside in Rome, Ga.

May 5, 2011, will mark 68 years with Mrs. Pearle at his side as his wife. Thank you for your service and happy birthday Mr. Lee from all of Climax!