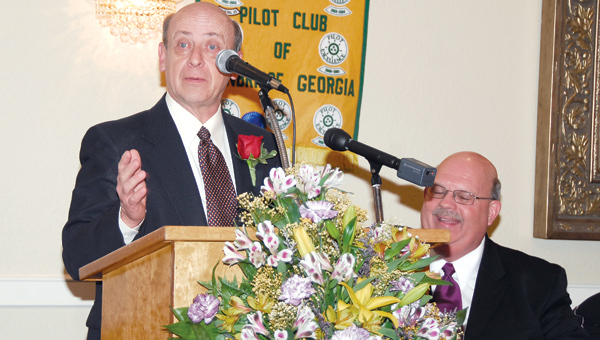 THE GUEST OF HONOR at the Pilot Club’s annual roast Thursday night, Paschal Ward ‘promised to play nice’ during the rebuttal to his roasters. Laughing in the background is the roast’s emcee, the Rev. Paul Medley of the First Baptist Church.

The speakers who roasted Decatur County Director of Bands Paschal Ward made fun of his hair and his height, among other things, but he laughed along with his many friends at the banquet held in his honor on Thursday night

Ward was the guest of honor at the Bainbridge Pilot Club’s annual roast, whose attendees filled a large banquet room at The Charter House Inn.

The Rev. Paul Medley, pastor of First Baptist Church—where Ward and his family worship—emceed the event. Medley made light of his own role as emcee, asking Paschal’s wife, Pam, to punch the guest of honor in the arm to wake him up if the reverend’s voice put him to sleep.

Rev. Medley then called upon Ward, who the pastor said he shared a balding head with, to join him at the podium. Striking a pose as “Dr. Evil” from the Austin Powers movies, Medley asked the audience, “What do you think? Me and Mini-Me?”

“We should be gathered here to honor Pam Ward,” Col. Breedlove said. “We know what you have to put up with. In fact, some of the [BHS] faculty members asked if you could keep him at home more often.”

Breedlove, putting a mocking twist on some of Ward’s accolades, said the BHS Band Boosters’ establishment of a band student scholarship in his name was “a subtle hint for him to move on.”

Later on, in his rebuttal, Ward said he hadn’t realized that was their intent—“I thought I was dying,” he joked.

Turning serious, Breedlove said Ward has high standards, is very competitive and brings out the best in his students.

Wynema Miles, former president of the BHS Band Boosters, was the next speaker, accompanied by her daughter, Tammi Godwin, a former student of Ward’s who later went on to be a middle school band director.

Mrs. Miles got one of the night’s biggest laughs right off the bat when she turned to Ward and asked which of two microphones should she use, “the short one or the tall one?”

When Ward replied that she could use either, Miles said she had asked because she didn’t know if the shorter microphone had been set up especially for Ward’s use.

Referring to Ward’s ability to get his band “wishlist” filled, Miles said, “I’ve often thought Paschal is the greatest politician in this county. He just hasn’t been elected yet.”

“Now he’s formed this community band. He’s always wanting someone to practice their instruments. Poor Tammi thinks she still has to go to band practice all the time.”

Godwin got in on the act by recalling an incident when she, Ward and other assistant band directors were attending a conference in Savannah, Ga., and the group’s van broke down. While it was getting fixed, Ward accidentally got his clothes covered in oil and grease, but to save his travel mates the agony of smelling fumes all the way home, he dug into his suitcase and put on already-worn clothes for the ride home, Godwin recalled.

“He is the reason I became an educator,” Godwin said. “He taught all the people around him wonderful life skills. He never asks students or adults to do things he is not willing to do himself first.”

Medley said he found it hard to introduce the night’s mystery roaster without giving his identity away, as it was Sheriff Wiley Griffin. Griffin and some of his deputies escort the band’s numerous buses on their trips to away football games.

“When I was asked to be the mystery roaster for Paschal, I found that request amusing,” Sheriff Griffin said. “Most of the time, when the sheriff shows up for you, it is not a joke.”

Concocting some silly background stories for Ward, Griffin said he asked the band director how he ended up in Georgia.

“‘Well, my first position was with Troy University’s band,’” Ward fictitiously told Griffin. “Our first game was with LSU. We drove up there and saw the sign that said, ‘LSU-left.’ So we went home.”

“I consider Paschal Ward a friend,” Griffin said. “I asked him, ‘So what is the secret to a successful marriage?’ And he said, ‘Friendship.’”

“I asked him, how would I know friendship had been achieved in a marriage?” Griffin said. “[Ward] replied, ‘Put your wife and your dog in the trunk of your car for an hour, then open the trunk and you’ll see who is really happy to see you.’”

Then Griffin unleashed a story that drew the loudest laughs of the night. The sheriff said Ward had come to him several years ago, saying he wanted to become an asset to the community and believed that being deputized would help him reach that goal.

“I told him a lot of citizens were assets to the community without being deputized and so I turned him down,” Griffin said.

Some time passed, and Ward made another request to be deputized, this time toward the goal of being a better role model. Again, the sheriff turned him down.

More time passed, and Ward came to Griffin in a frenzy.

“‘Sheriff, I look like Barney Fife and I want to be a deputy!’ Griffin jokingly recalled Ward as demanding. “So I deputized Barney.”

All kidding aside, Griffin said Ward honors honesty and friendship and added he believed Ward truly is a good asset to his community and a role model for his students.

Ward, who said he had promised his wife to be nice during his rebuttal, still laid into his roasters a little bit.

“I don’t know how Col. Breedlove made the full rank of colonel—he’s scared of thunderstorms,” Ward joked.

Speaking of Godwin, his former student and colleague, Ward said she used to call him occasionally during her college years at Troy to ask his advice. One time, she called him in tears to ask what was she going to do about a speeding ticket she had received traveling between Bainbridge and Troy, Ala.

“I gave her some great advice: I said, ‘Are you going to call my mom or your mom? There’s this little thing called insurance—they’re going to find out.’

“That’s something I’ve had to experience first-hand with my own daughters,” Ward joked.

Speaking of the sheriff, Ward said he appreciated how Griffin and his deputies looked after the BHS band on road trips.

“Although, nine out of 10 times, we take a wrong turn following them.”

Ward got back at Rev. Medley, joking that he was going to have to look for another church to attend.

Then being serious himself, Ward pointed out that each of his roasters had talked about how important it is for band students to be good citizens and good people.

“That is the answer to all of our problems,” said Ward. “I like to tell my students about perserverance. Life can be difficult. When obstacles come up, you just keep going.”

“May our community relationships last forever,” Ward closed. “I don’t plan on going anywhere until the good Lord calls on me. When I get to Heaven, I’ll probably argue with him about who gets to direct the marching band. He’ll win, trust me.”

The following arrests and citations, a list of those occurring between Feb. 22-Feb. 25, have been reported by the Decatur... read more