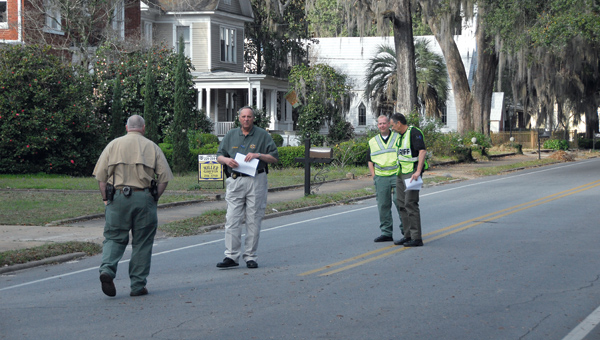 SHERIFF’S INVESTIGATORS talk to each other on Broughton Street during a coordinated effort on Wednesday morning between Bainbridge Public Safety and the Sheriff’s Office to distribute flyers with information about a Monday home invasion at 618 E. Broughton St.

A home invasion occurring on the 600 block of Broughton Street on Monday morning resulted in the injuries of an elderly couple and has caused concern amongst neighbors.

The wife stated she screamed but the intruder threatened to kill her if she didn’t be quiet. The victim reported the intruder took her purse, which contained a $6,000 check, three checkbooks, credit cards, her driver’s license and keys.

The intruder was described as a black male, around 30 years old and having short hair, wearing dark pants and a striped shirt. A neighbor also reported seeing a dark-colored bike with red handlebar grips near his home that may have belonged to the intruder.

Both husband and wife were transported by ambulance to Memorial Hospital for treatment, according to BPS investigators. The elderly female broke a bone when she fell, Chief Investigator Frank Green said.

A reward for information leading to the arrest and conviction of a suspect in the home invasion is being offered through the Decatur County Citizens Against Crime fund. To give police a tip, call BPS at 248-2038 or the Sheriff’s Office at 248-3044.

Safety forum to be held

With the home invasion happening on a usually-quiet stretch of Broughton Street, some of the couple’s neighbors are concerned about crime in central Bainbridge.

Michelle Miller spoke to county commissioners last week about her organization of a public forum for citizens to discuss crime concerns and learn more about BPS’ Neighborhood Watch program. The forum, which is being co-organized by Attorney Ryan Cleveland, will take place on Tuesday, March 1, at 6 p.m. in the secondary courtroom of the Decatur County Courthouse, located on Water Street in downtown Bainbridge.

THE GUEST OF HONOR at the Pilot Club’s annual roast Thursday night, Paschal Ward ‘promised to play nice’ during the... read more