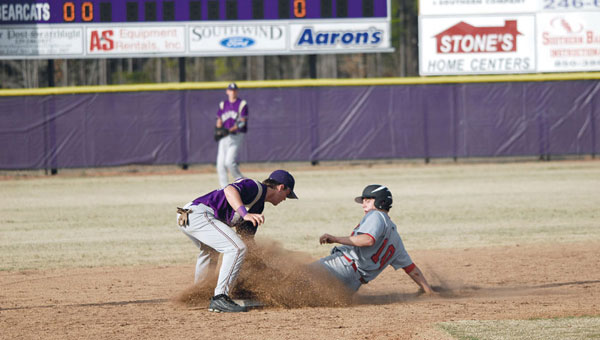 A four-run, sixth-inning rally fell a little short for the Bainbridge High School Bearcats Thursday at Bearcat Field as the Dothan, Ala., High School Tigers hung on for a 10-6 victory.

The win, which came in the second round of the 2011 Adidas Tri-State Invitational Tournament at Bearcat Field, evened Bainbridge’s record at 1-1.

The Bearcats opened tournament play with an 11-0 Monday win over the Sneads, Fla., High School Pirates.

Center fielder Stephen Lightfoot walked on a 3-1 pitch to open the Bearcats sixth. Right fielder Ryan Wade followed with a single down the right field line moving Lightfoot around to third.

After Brandon Bates walked to load the bases, catcher Drew Kelley smashed a three-run triple to cut the Tigers 10-2 lead to 10-5.

Kelley tagged up and came across with the Bearcats sixth run when center fielder Reid Heard hit a sacrifice fly to center.

The Tigers opened the game strong, scoring eight runs in the first two innings. They scored five in the first and three in the second.

The Tigers eighth run crossed the plate in the top of the third. It was scored by left fielder Sherman Hill, who led off with an infield single to short, moved up to second on a sacrifice bunt by second basemam Patrick Rogers and came in on an RBI single to center by catcher Adam White.

The Bearcats got a run back in the bottom of the fourth to cut the Tigers lead to 8-1. Shortstop Steven Bench ignited the rally with a single to left. He moved up to second when designated hitter Jordan Cox was hit by a pitch.

With one away, right fielder Trevor Watts walked on a 3-1 pitch to load the bases. Center fielder Stephen Lightfoot then drew a walk to force in Bench.

The Tigers ninth run crossed the plate in the top of the fifth. First baseman Hayden Boling led off the inning with a double to deep center field. He came around to score on a throwing error.

In the bottom of the fifth, the Bearcats scored a run to cut it to 9-2. Third baseman Blake Voyles led off the inning with a single to right and moved up to second on an infield single to third by catcher Kelley. First baseman Gunner Griffin’s single to right drove in Voyles.

The Tigers scored their 10th run in the top of the sixth. It was scored by Robert Walker, who singled, stole second and came in on a single by John Lagrand.