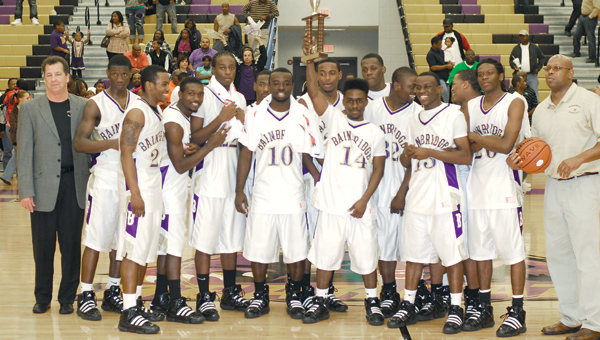 With the win, the Bearcats are now 26-2 on the season and have earned the right to host up to two rounds of the State AAAA basketball tournament in Bainbridge. In the first round, the Bearcats will play either McIntosh or Alcovy, whichever is the No. 4 seed in Region 3, said BHS Coach Rickey McCullough.

The game will be played at the BHS gym either next Friday or Saturday. With the BHS Lady Cats finishing runners-up in the region, they will also host their first-round matchup against the No. 3 seed from Region 3, which is based in southern suburban Atlanta.

BHS built an early 8-2 lead and never trailed throughout the game. TCC’s defense brought the score closer at 18-14 at the end of the first quarter, but the Bearcats quickly regained their momentum.

“We got started scoring real early and just continued building on our lead,” Coach McCullough said.

BHS senior Devon Baulkman had 18 first-half points, taking the Bearcats out to a 43-23 halftime lead.

With the win virtually assured late in the fourth quarter, BHS began playing a stall offense and both teams eventually substituted bench players.

In addition to Baulkman, four other Bearcats were in double figures: Ronald Crawford with 13, Paul Chukes had 11, Rodney Glenn and Dontavious Marshall each had 10. Also supporting the Bearcats’ win were Adam Taylor with five, Rohan Gaines with five, Shawn Samuels with four and Jamar Venisee-Cosby had one.

The Bearcats have advanced to the Final Four round of the state tournament in each of the past two years. The Lady Cats went to the state Final Four two years ago.

In the boys’ consolation game, played earlier on Saturday, Hardaway defeated Northside-Warner Robins 84-78. Those teams will also advance to the state AAAA tournament as the third and fourth seeds from Region 1.