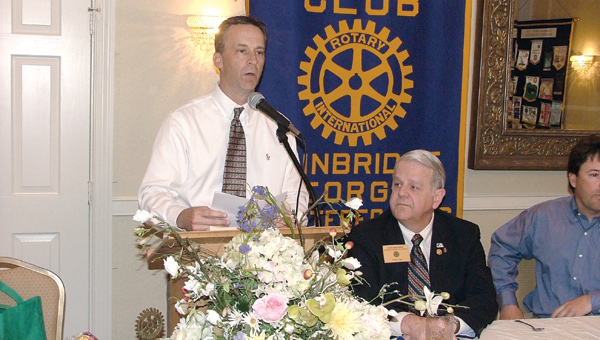 Bainbridge High School Bearcats head baseball coach Scott Miller talked Tuesday to Rotarians about what a positive influence baseball and the Fellowship of Christian Athletes have had on his life.

Coach Miller, who played football and baseball at Godby High School in Tallahassee, Fla., told the Rotarians that his acceptance of Jesus Christ as his savor and leadership in the Fellowship of Christian Athletes (FCA) was due to the influence of a high school coach.

“My coach kept inviting me to attend an FCA camp, but I kept resisting,” he said. “Finally I went to a weekend retreat, which led me to accept Jesus Christ as my savior and get involved in FCA.

Miller went on to play baseball at Stetson University where he earned a degree in business management. He said he got a job with a business and worked his way all the way up to sales manager, but he said something was missing.

“The Lord was guiding me to work with young people, so I resigned my job as sales manager and began my 20-year career in high school baseball coaching,” he said.

The coach also talked about the Bearcats baseball team and its upcoming season.

“We will begin our season Monday in the opening round of the 2011 Adidus Tri-State Invitational Tournament, which we are hosting” he said.

They will play the first tournament game Monday at 4 p.m. against Sneads, Fla., High School at Bearcat Field. There are eight teams in the tournament, four from Georgia, two from Florida and two from Alabama, and it will run through Friday, Feb. 25.

“Georgia teams, in addition to us, are Cairo, Colquitt County and Seminole County. Sneads will be joined by fellow Florida team Rickards of Tallahassee. Dothan High School and Northview High School of Dothan will represent Alabama in the tournament,” Miller said.

The Bearcats regular-season opener will be Thursday, March 3, against the Marianna, Fla., High School Bulldogs at 5:30 p.m. at Bearcat Field.

Among the top returnees for the Bearcats this season is catcher Drew Kelley, who was chosen one of the top 100 baseball prospects in the state June 15 at a Georgia Dugout Club Top 100 Underclassman Showcase at Middle Georgia College in Cochran.

In November, Kelley won the Bearcats Gold Glove Award for throwing out 50 percent of opposing base runners attempting to steal last season.

Left-hander Marty Anderson, who won the outstanding pitching award in 2010, is also back. He pitched 56 innings and had an outstanding 2.38 earned run average.

Coach Miller concluded his remarks by thanking the Rotarians for their support of the Bearcats baseball program.

“I know many of you have supported our baseball program financially and in other ways, and I really appreciate it,” he said.