Lady Cougars on to conference finals 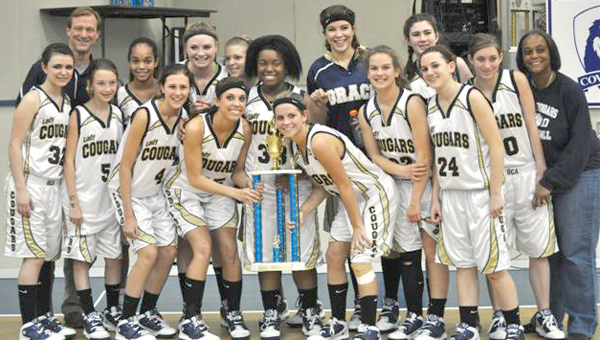 They followed that up with a 50-24 Saturday, February 12 win over Emmanuel in the championship game of the Panhandle Christian Conference East Regional Tournament at Covenant Christian School in Panama City, Fla.

They will move on to this Friday and Saturday’s Conference Tournament at Aletheia Christian School in Pensacola, Fla.

The Lady Cougars featured a balanced scoring attack in their first win over Emmanuel. Brock Bailey led the way with 18 points.

Bailey was followed by Rachel Harrell with 13, and Emma Heard and Jocelyn Jacobs with 11 apiece. Christy Colvin and Caylin Walsingham scored two points each.

In their Conference championship and Final Four clinching victory over Emmanuel, the Lady Cougars were led by Bailey with 19 points and Heard with 10.

Rounding out the Lady Cougars’ scoring column were Jacobs with eight and Colvin with three.