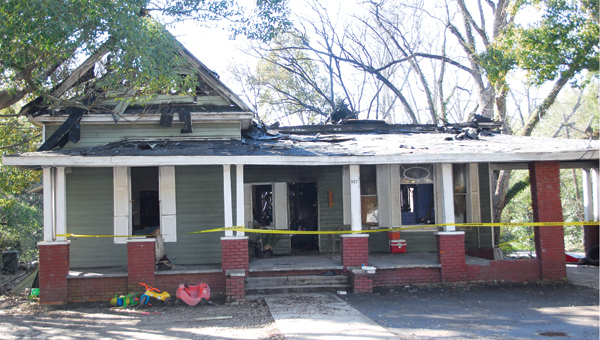 THE AFTERMATH OF A FIRE that destroyed a home at 517 S. Washington St. in Bainbridge on Monday night is seen in this photo taken on Tuesday afternoon.

Fire destroyed a residence at 517 S. Washington St. on Monday night, according to Bainbridge Public Safety.

BPS officers responded to a large, older home at the intersection of Washington and Perry streets at about 8:20 p.m. There was already a large amount of flames and smoke coming from the house when officers arrived, BPS Fire Chief Dennis Mock said.

Firefighters led by Assistant Fire Chief James Brock began extinguishing the rear of the house, but the fire had reached the attic area of the home, which was built in the early part of the 20th century out of pine wood, according to tax records.

When Chief Mock arrived on the scene at 8:52 p.m., the extent of the fire concerned him enough to call for mutual aid from Decatur County firefighters. The fire caused part of the home’s roof to cave in and burn through natural gas and power lines running to the home. Firefighters remained at the scene until around midnight.

Chief Mock said it is believed the fire started in the kitchen, perhaps in an electrical panel box.

Decatur County Fire and Rescue and volunteer firefighters from the Blackjack, Climax and Recovery stations responded to help BPS bring the fire under control.