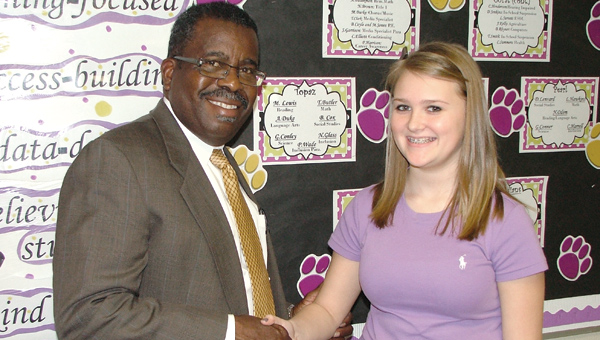 Imagine studying between 50 to 100 spelling words every night!

That is what Erin Caplan, an eighth-grade student at Bainbridge Middle School has been doing for weeks—even years.

And, it has paid off.

She recently placed second in the Big Bend Regional Spelling Bee held in Tallahassee, Fla., on Saturday, Feb. 12. The competition, hosted by The Tallahassee Democrat, was among 12-county winners from North Florida and South Georgia.

Miss Caplan is no stranger to winning bees. She has five trophies at home from winning her school spelling bee three years in a row, having gone to the district two times and to the regional two times. Last year, she placed third in the regional, and this year she moved up to second place.

First-place winner will travel to Washington, D.C., to represent the area at the Scripps National Spelling Bee in May.

BHS Middle School Principal Marvin Thomas said the school is very proud of Erin, whom he called “Our little speller,” before adding, “She could teach us all how to spell.”

Erin said her preparation begins when she is given the 2011 list of spelling bee words in advance, so that she can study their meaning and root origin, as well as the spelling. She also looks up words in the dictionary every day. She became interested in spelling in sixth grade when she entered her first spelling bee and realized she was good at it.

Erin, who lives with her grandmother, Suzanne Mills, said her family, including her grandfather, Herman Mills, and step-grandmother, Debra Mills, encourage her to excel at spelling.

What she enjoys most is the adrenaline rush when she gets it right.

She and the winner went 15 rounds against each other before Erin missed her last word.

What was the word Erin missed?

It was “spinet.” She definitely knows how to spell it now, as she spelled it for this reporter.