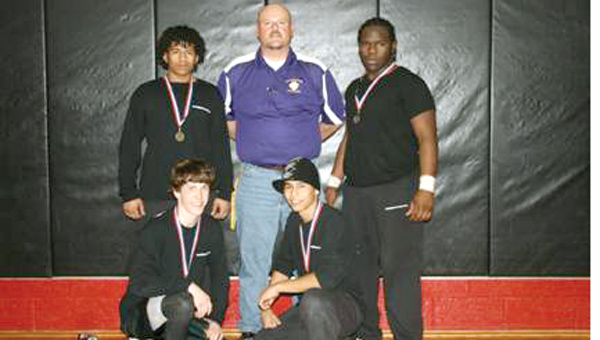 “I am very proud of our team,” coach Kirkland said. “Despite having two wrestlers who did not show, two who did not make weight and one who had a death in the family, the team still finished high in the rankings.

Cole Bulger, competing in the 119-pound class, lost to his Lee County opponent by a score of 7-0. The last time these two faced off , Bulger was defeated by pin.

“I know he had worked himself into a position to win through hard work. His opponent was a state-placer last year, and it showed that Bulger had worked hard by not allowing Lee County to pin him this time.”

Coach Kirkland said Bryan Ordonez, competing in the 135-pound class, was his most surprising wrestler. Ordonez faced off against the Harris County wrestler, who had only lost twice throughout this year.

Although Ordonez lost his match, 8-6, when it concluded the opposing coach’s remarked that it was undoubtedly their wrestler’s toughest match, Kirkland said.

Rounding out the Bearcats Sectional qualifiers were Lawrence Jones in the 285-pound class and Roberto Sierra in the 160-pound class.

This Friday and Saturday, Feb. 11 and 12, the qualifiers will be competing in the Sectional Tournament at Upson-Lee High School in Thomaston.

In order for a wrestler to qualify for state, he must place no lower than eighth at the Sectionals where 47 teams from around the state in Class AAAA will face off.