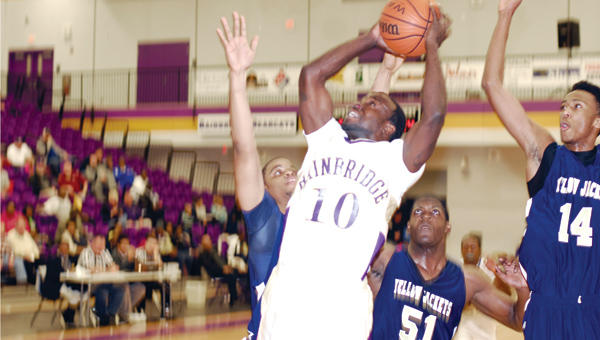 On Saturday night, the Bearcats were awarded a 1-0 forfeit victory when the Baker County High School Bears could only produce four able players in Newton.

The Yellow Jackets took the early lead Friday night, jumping out front 4-0 on consecutive layups by Ray Drew, a highly recruited defensive end with TCC’s football team who signed a national college football letter of intent with the University of Georgia Bulldogs.

The two wins improved the Bearcats overall record to 20-2 and their Region 1AAAA mark to 3-0. They concluded their regular home-season schedule with a Tuesday night Region 1AAAA home game against the Lee County High School Trojans.

Their final regular season game will be Saturday against the Cairo High School Syrupmakers at 7:30 p.m. in Cairo.

On Friday night, Drew grabbed a rebound and laid it back in at the 6:56 mark. He laid one in off the left glass at the 5:15 mark to give the Yellow Jackets an early 4-0 lead.

The Bearcats quickly pulled even 4-4 after senior forward Devon Baulkman hit a jumper from the right side at the 5:17 mark and then hit free throws at the 4:55 mark.

The Yellow Jackets grabbed the lead back at 7-4 when Chris Calhoun laid in a layup off the left glass at the 4:40 mark, and Drew hit one of two free throws at the 4-minute mark. 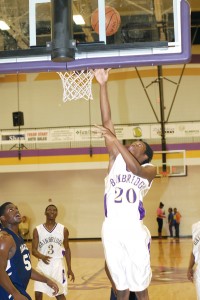 Trailing 27-13 just over halfway through the second quarter, BHS outscored their visitors 16-4 the remainder of the quarter to trail by just two, 31-29, at halftime.

The Bearcats took the lead 33-31 on a jumper from the right baseline by Paul Chukes at the 7-minute mark of the third quarter and they would never again trail.

The Bearcats were paced Friday night by three double-figure scorers. Baulkman led the way with 24 points. He was followed by Rodney Glenn with 19 and Ronald Crawford with 10.

Completing the winning scoring chart were Rohan Gaines with four, Shawn Samuels with three and Paul Chukes with two.

Double-figure scorers for the Yellow Jackets were Chris Calhoun and Tramel Anderson with 16 points apiece and Drew with 11.