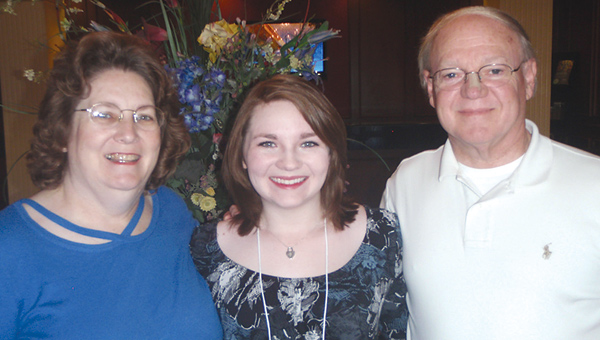 BAINBRIDGE COLLEGE student Jana Simmons (center), who presented her research paper at the Georgia Political Science Association’s 2010 Conference, is seen here at the conference in Savannah with her parents, Jan and Doug Simmons of Cairo.

Bainbridge College student Jana Simmons of Cairo was granted the rare honor of presenting her research paper at the Georgia Political Science Association’s 2010 Conference, which was attended by approximately 200 leading political scientists and scholars from around the state and the world.

“It is very unusual for an undergraduate’s paper to be selected for presentation at these conferences,” said BC professor John Vanzo, who mentored her through the process. “It’s considered a rare achievement for graduate student research to be accepted, and sometimes it’s even hard for professors’ work to be accepted. For a first-year college student like Jana, it is nothing short of amazing. Needless to say, we here at Bainbridge College are all very proud of her.”

Ms. Simmons was the only undergraduate student on the panel addressing “Lessons from History: What Yesterday’s Actions Say about Tomorrow’s Plans.”

She presented her paper, “The Agile Tiger: Sweden’s Maintenance of Neutrality during World War II.” In her paper she examined the structure and functions of Sweden’s government and gave special emphasis to the policies the government followed to avoid military involvement during the war.

Presenting the paper at the conference in Savannah is among many academic achievements by this talented student, who took so many BC courses while in high school that she entered her first year on campus as a sophomore.

Simmons, who was valedictorian of her graduating class at Grace Christian Academy, was elected to serve as president of the BC Student Government Association, received a full tuition scholarship from Wine and Spirits Wholesalers of Georgia Foundation, and received an additional scholarship at Bainbridge College Honors Night.

Simmons’ travel expenses to the November conference were fully underwritten by Bainbridge College, which has a strong commitment to fostering students’ scholastic excellence and professional development.

Tax codes to get overhaul

State legislators are considering a major overhaul of the state’s tax structure that may see consumers paying sales tax for... read more