They had a ball! 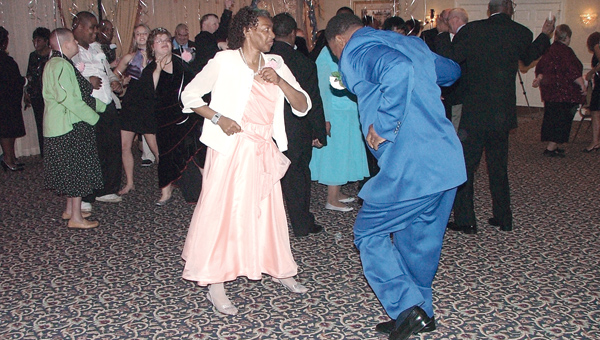 WILLIE JENKINS shows how to "GET DOWN" and have some fun.|Carolyn Iamon

Saturday night was a prom night for the Special Olympians in Decatur County.

Dressed in formal or Sunday-best clothes, they turned out in large numbers to attend the Snowflake Ball held at The Charter House Inn. Based on the enthusiastic good time demonstrated by those in attendance, the event was a huge success.

The prom theme was prevalent, as some attendees even came in a limousine. All were greeted at the front door by the Rev. Paul Medley, coordinator of the event, and other steering committee members.

The event, a first for Bainbridge, was planned and carried out by the Special Olympics steering committee, with Pat Harrell and Jim Beck being credited with the original idea.

The banquet room of The Charter House sparkled with blue balloons and silvery lights and decorations, compliments of Bainbridge High School, which kindly loaned their prom decorations for the event, thus creating a festive scene for the ball guests.

Prior to the dance, many of the ladies in attendance received a “beauty treatment” of makeup and hairdos from a committee of volunteers headed by Joanie Williams and her daughters.

Prom dresses for the ladies, and suits for the gentlemen were donated by private individuals to those who might otherwise not have suitable attire.

A promenade opened the evening, with each party-goer making their entrance beneath an archway of blue balloons. Each was announced by name, and a commentary made on their attire. Complimentary individual photographs were made under a similar archway at the corner of the room.

Once the music provided by deejay Bill Searcy began, attendees crowded the dance floor and thoroughly enjoyed themselves dancing and just being with each other in such a festive location.

Dance contests were held and prizes given to those deemed by the judges to have been the best at the various styles of dancing.

There were some real dance standouts, such as Willie Jenkins and his date, Barbara Williams, or Alvin Roussey, who took the floor complete with white glove and demonstrated his Michael Jackson moves. Even those unable to get up and dance showed their pleasure with the music as they swayed their heads and hands to the rhythms.

Refreshments were donated by members of The Pilot Club and served from a table decorated in the same blue and silver motif.

Medley said the Special Olympics steering committee hopes to make this an annual event, but he thinks they will need to find a bigger place to hold it next year. In addition to the 60 reservations made by individuals with special needs, there were escorts, family members, and a host of volunteers who helped plan and carry out the evening—making for a crowded room.

This is one of four special events planned for the year according to Harrell.