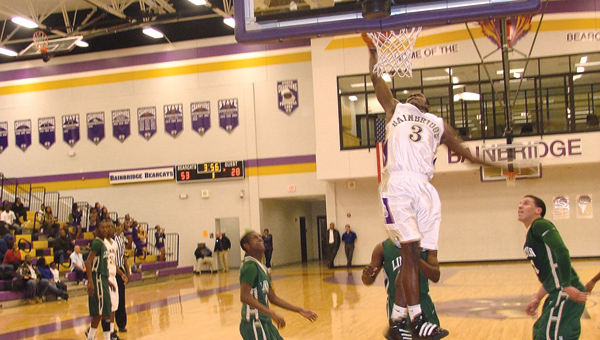 Devon Baulkman led the way with 17 points. He was followed by Rodney Glenn and Jamar Venisee Cosby with 16 apiece, Shawn Samuels put in 15, and Paul Chukes added 11.

Kendrick Daniels of the Trojans took game-scoring honors with 35.

After the game, Bearcats coach Rickey McCullough praised his team for their unselfish play.

“It was a good team effort,” he said. “Everybody got a chance to play. We knew Kendrick Daniels was an outstanding player and would get his points. When we tried to double team him, he would still make some moves and get open.”

The Bearcats took an early 2-0 lead on a layup off the left glass by Baulkman just 25 seconds into the game.

Daniels countered with a three-point shot to put the Trojans up 3-2.

A layup off the right glass by Ronald Crawford at the 5:03 mark and a three-point jumper from the right side by Trea Kelly at the 5:03 and 4:37 marks gave the Bearcats a 7-3 lead and they would never again trail.

Behind the five double-figure scorers in the Bearcats’ scoring column Friday night were Crawford with 8, Kelly with 5 and Quincy Fortson with 2.

Behind Daniels in the Trojans scoring column were A.J. Mussington with 20, James Hearns with 11, Tai Williams with 5 and Alex Jackson with 4.