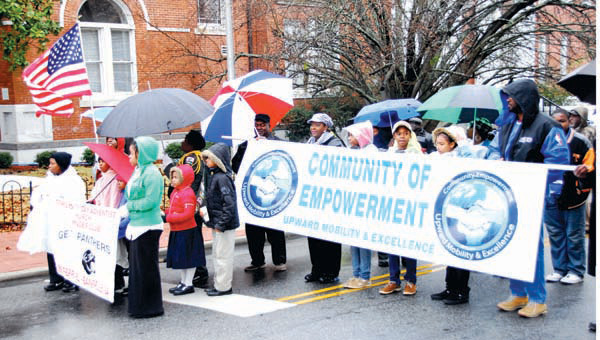 The weather was rainy and gloomy, but the spirits of those who joined in the parade then gathered at Hutto Middle School were not dampened in their observance of the birthday of Dr. Martin Luther King Jr. held in Bainbridge on Monday. 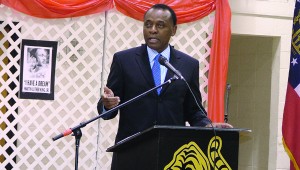 Featured speaker was the Rev. Daniel Simmons, a native of Cairo, and now senior pastor of Mount Zion Baptist Church in Albany, who based his speech on Proverbs 22:6, “Train up a child in the way he should go, and when he is grown he will not depart from it.”

The remarks were in keeping with the theme of the day, “Making a Change … Youth are the Future.”

Simmons told the assembled crowd of adults that it was necessary for them to make conscious decisions to make changes in their own lives so that their children can be prepared for the future. He said he did not fault the younger children for where they are today, and advised parents if you want to teach them, you have to spend time with them, be there with them and be good role models.

He explained children must be taught the three “R’s” in life, in addition to reading, writing and arithmetic taught in the schools. They are Respect, Responsibility and Relationships with the people that matter. “You learn those at home, not in the classrooms,” he said.

As for what is taught in schools, Simmons made the case for more balanced emphasis on academics and less on sports, saying he would like to see more public recognition given for academic achievements.

Simmons said Dr. King had all of the support and training from his parents who realized God’s plan for their son, and he had one more thing we can all seek.

“You can do all things through Christ,” he quoted and advised parents, “Let your children see the God in you, and when they make mistakes, let them see the mercy of God in you.” 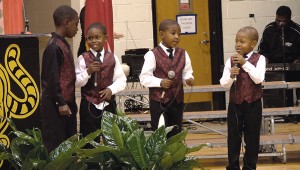 Youth and music played a big role in the program, which opened with posting of the colors by the Bainbridge High School Junior ROTC. The Hutto Middle School chorus, under the direction of Leah Ritt, sang two selections, and four small boys who call themselves The Little Moore Gospel Choir, sang two songs to the enthusiastic pleasure of the crowd. Evangelist Grace Cooper also moved the assembly with two Gospel songs. 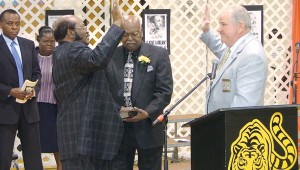 A special presentation was made to the Rev. John Thomas by Decatur County Sheriff Wiley Griffin, who then deputized Thomas as a deputy sheriff for the county.

In his preceding remarks, Griffin said he wanted to recognize the many sacrifices made by Dr. King, his family as well as other brave citizens who strive to make this county a better place to live.

“I’m honored to recognize an individual from Decatur County that I believe sets an example for all of us to follow. This individual is never seen without a smile and he is a pleasure to be around. He just makes you appreciate the character of a good person.” Griffin said.

He related the events of July 14, 1972, when two Bainbridge police officers had stopped to help a lady having car problems. Within minutes another friend of the first woman had stopped to help. Both women were nurses from Miller County. While the officers were helping remove the disabled vehicle from the roadway it was struck by a drunk driver. The impact killed one of the nurses and severely injured Officer John Thomas of the Bainbridge Police Department, who lost his leg as a result of the accident.

Griffin said due to the faith of Thomas, and his belief in the dream of Dr. Martin Luther King Jr., Thomas has set the perfect example for our youth to follow. He has taken the life he was dealt and made a difference in so many people’s lives, inspiring them to be men of character.

“He is a hero, not because of what he did, but how he lives his life,” said Griffin.

Burke said the one positive result of segregation, if there was one, was that these highly educated professionals who would have held excellent positions in their chosen fields had all things been equal, became overqualified teachers in the school systems.

A number of others representing government entities, educational institutions, and the NAACP, as well as ministers from local churches participated in the program, which had Florence Harrell, assistant principal at Hutto Middle School acting as master of ceremonies. Concluding remarks and acknowledgments were given by Liz Tomlin.

Saturday will be special sports day