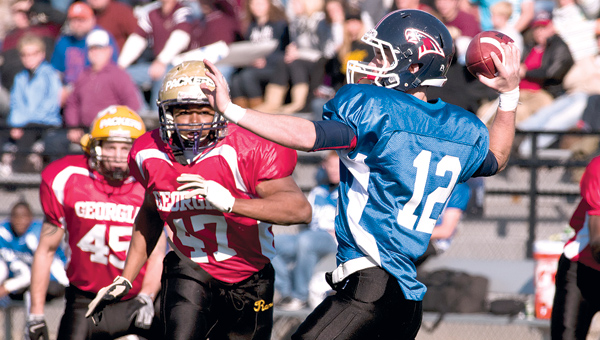 Four Bainbridge High School players—Jamario Brown, Jim Griffin, Dewayne Gurley and Qwatavious Middleton—played for the Georgia team, made up of players primarily from Southwest Georgia west of I-75.

Georgia drove to the Florida 8-yard line with less than a minute to play, but a pair of passes thrown by Colquitt County quarterback Tyler Brown passes fell incomplete.

After Tyndall’s kick tied the game, Georgia had one last chance to win, but a 61-yard field goal attempt by Thomasville’s Antonio Pistelli fell short on the last play of the game.

DeVore, who rushed for one touchdown and completed 10-of-14 passes for 131 yards and another score, was Florida’s Offensive Player of the Game.

The Florida team was made up of players from the Big Bend area.

Mitchell County wide receiver Jesse Atkins, who caught three passes for 75 yards, including a 27-yard score from Brown in the fourth quarter, was Georgia’s Offensive Player of the Game.

Thomas County Central’s Eric Dodson, who shared time at quarterback for the Georgia team with Brown and Lee County’s Justin Walker, was the game’s leading rusher with 51 yards on 12 carries.

Colquitt County’s Tevin King, who rushed for 2,047 yards during the Packers run to the Class AAAAA state championship game, had 37 yards on six carries and caught three passes for nine yards.

But he injured a shoulder early in the fourth quarter and was not in the game when the Georgia team chased a potential game-winning touchdown late in the game.

Brown, like King, was playing his final game in front of the home fans in Moultrie. He completed 11-of-16 passes for 146 yards and the touchdown pass to Atkins.

Ettinger also played well for Florida, completing 10-of-16 passes for 112 yards and an interception, picked off by Dougherty High’s Sharoski Griffin.