Fred getting its bite back 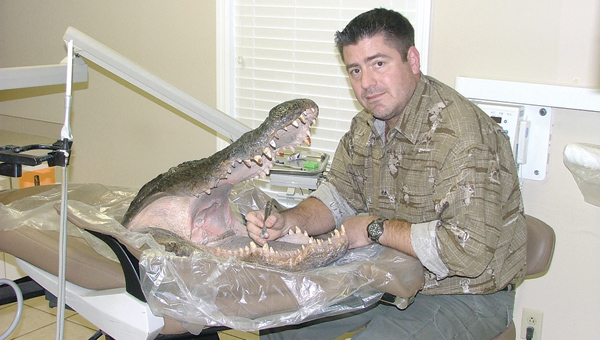 SPECIAL PROJECT, Dr. Hillman A. “Chip” Walden fills teeth in the head of a deceased alligator, which is usually on display at the U.S. Army Corps of Engineers Mobile District at the Woodruff Seminole Site office in Chattahoochee, Fla.|Joe Crine

Dr. Hillman A. “Chip” Walden of Port City Family Dentist Associates is doing something he couldn’t even have imagined when he began his dental career in 2002.

As a favor to the U.S. Army Corps of Engineers Mobile District’s Lake Seminole office, he is filling some teeth in the head of “Fred,” a stuffed, large alligator head that is usually on display at the office.

Corps of Engineers Park Ranger Marlene Love-Jones said she named the alligator after he washed up on the road during the 1994 flood. Fred’s body weighed approximately 450 pounds, and measured more than 12 feet long.

Walden said Thursday that he first found out about the need for repairing the teeth, which had been damaged in the alligator’s mouth through the years, after his wife, Kim, who is communications and membership director with the Bainbridge-Decatur County Chamber of Commerce, visited an ACF water safety display that included “Fred” at the Decatur County Fall Festival and Fair.

“The representative at the fair mentioned to my wife that it would be nice if they could find a dentist to volunteer his services to repair many of the alligators damaged teeth,” he said.

“A U.S. Army Cops of Engineers park ranger brought the head by last Friday, and I have already filled between 20 and 25 teach. There are around 33 or 34 teeth that need filling.”

Dr. Walden said he had to order some special filling material for the job.

“A special, dark filling material was needed for the job,” he said. “A lighter-colored material is used in filling people’s teeth.

His craft on “Fred” doesn’t go by unnoticed.

“When patients are brought back for their appointments, they often stop and observe me working on the alligators teeth,” Walden said.

Three nominated for Woman of the Year

Three local women have been nominated for the annual Woman of the Year award, which will be announced at the... read more