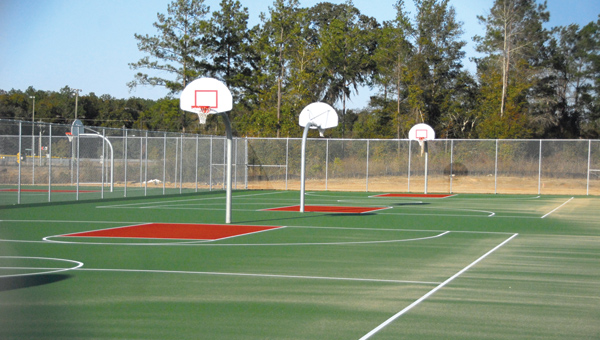 FIVE NEW COURTS are ready for basketball games at the Bill Reynolds Sports Park on Cox Avenue. The courts will be monitored and can be used at night.|Brennan Leathers

The City of Bainbridge is realizing some of its master plan for transforming the area around the city’s two riverside parks, the Earle May Boat Basin and Cheney Griffin Park.

Currently, work is finishing up on the third phase of the Bill Reynolds Sports Park off Cox Avenue. The expansion includes eight new baseball/softball fields, five basketball courts and two multi-purpose fields. It’s located a short distance from the existing fields and across the street from the Humane Society Animal Shelter. 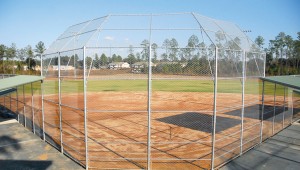 ONE OF EIGHT new baseball/softball fields at the Bill Reynolds Sports Park will soon host travel team tournaments and be ready when Leisure Services play begins in March.|Brennan Leathers

The new additions include amenities for visitors, such as a large picnic pavilion, covered bleachers, covered batting cages and state-of-the-art concessions kitchens. The total project cost is approximately $2.7 million, paid for by receipts from the Special Purpose Local Option Sales Tax (SPLOST).

A large new parking lot will be paved adjacent to the fields around the time the new fields are ready in mid-February. The basketball courts are ready

The sports park will now have 24 lighted baseball/softball fields available for hosting tournaments, as well as Leisure Services youth and co-ed leagues and practices. With about 64 teams playing in youth leagues last spring, each with two to three practices a week, the new fields will be put to good use come March and April, said Leisure Services Program Director Diane Atkinson.

City officials are already realizing their hope that the fields will attract out-of-town visitors for tournaments: two sizable baseball and softball events are already booked for February and there’s a lot of interest in the new fields, Leisure Services Director Al Kelley said.

The Bainbridge City Council will take a look at the possibility of constructing a paved, lighted trail along the Flint River, an idea that’s a part of a master plan design for the Boat Basin and Cheney Griffin Park.

The trail could be used by people walking, running or using a non-motorized vehicle such as a bicycle, said Dustin Dowdy, assistant to the city manager. Benches, light fixtures and fishing piers would be placed along the trail, he said. A playground could be put in at Cheney Griffin Park in the future, Dowdy said.

The trail would begin at the old train trestle near Cheney Griffin Park, continue southwest along the river side of Hatcher Road, turn onto Boat Basin Circle and go past the Chamber of Commerce building. A suspension bridge would be built over the narrow river channel in the Boat Basin and the trail would continue past the old locomotive to the fenced-in animal area. There, the trail would turn left and connect with the existing nature trail.

“This is another piece of the [Downtown Waterfront Connectivity Plan]; It’s the next most logical piece, so that’s why it’s been moved to the forefront. The City Council will have to think about the proposal and approve whether or not to go ahead with the project,” said City Manager Chris Hobby.

As you start the New Year, you may want to make a resolution to begin checking your credit report regularly,... read more