Leadership changes at Bainbridge College and the Decatur County School System top the list of news stories for 2010.

When BC President Tom Wilkerson and School Superintendent Ralph Jones announced their retirements, they set in motion a series of events to find their successor and to honor their service.

Those two stories and the news stories surrounding them are The Post-Searchlight’s top two stories for 2010.

The year’s top 10 news stories for Decatur County may be events that occurred or that culminated or had significant development within the past 12 months. The goal is to select and rank the things with (1) the greatest impact on (2) the greatest number of people in Decatur County for (3) the longest time; or (4) which are sufficiently significant to an individual or group to attract state or national notice. 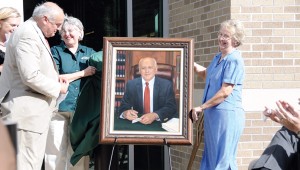 Bainbridge College President Tom Wilkerson retired at the end of 2010.

After serving more than five years as the leader of the college, Wilkerson announced his retirement in January, which set in motion the search for his successor for the rest of the year. During late summer and early fall, the presidential search committee invited its top candidates to Bainbridge to meet with students, faculty, staff and the community.

In November, the Board of Regents announced Richard Carvajal will assume the presidency on Monday, Jan. 10.

During Wilkerson’s tenure, he fixed the Charles H. Kirbo Center. What some had suggested be torn down, he was able to salvage it and persuaded the state to pick up the extra cost of refurishing and renovating the building.

The college’s Student Wellness Center was also planned and built under Wilkerson’s tenure, which is a separate Top 10 entry.

In May, the Decatur County Board of Education chose Fred Rayfield to replace the retiring School Superintendent Jones.

Rayfield came to Bainbridge from Cook County, and he was unanimouly chosen as the one and only candidate out of a field of 24 applicants. When Rayfield arrived, he was forced to tackle a very tight budget, which included cutbacks in the BOE budget and teacher furloughs, that the economy and state budget cuts mandated.

Jones announced his retirement in February, and it became effective on June 30. Jones spent 36 years in education, and was an employee of the Decatur County School System for 25 of those years. The last eight of those years was superintendent schools, which included a successful completion of the new Bainbridge High School. Prior to that, Jones served as the Bainbridge High School principal and head coach of the BHS Bearcats 1982 state championship football team.