Ten children from each elementary school and 20 each from Hutto and Bainbridge middle schools arrived at Wal-Mart to receive a coat.

Athletes, who ranged from football players such as Rohan Gaines and Keenan Adams to cheerleaders such as Ivy Heard, represented Bainbridge High School. Themed “Shop with a Jock,” the athletes assisted the children with getting a properly-fitting coat.

BHS coach Kelvin Cochran said the project was also to instill the athletes with a high level of social consciousness for their community.

Butler’s foundation worked with the Decatur County School System as each school picked the 10 needy students and then provided tax-exemption numbers to Wal-Mart.

Prior to Thanksgiving, Butler provided traditional turkey meals to needy families, with Cochran assisting with the coordination and BHS football players and cheerleaders assisting with loading the meals into families’ vehicles.

Butler was a four-year letterman in football and the Georgia state long jump champion for Bainbridge High School.

He earned a scholarship to Georgia Tech where he was a two-time all-conference free safety and two-time semifinalist for the Jim Thorpe Award as the nation’s top defensive back. 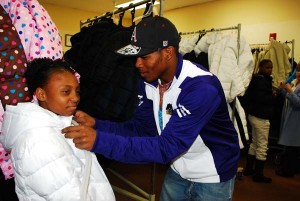 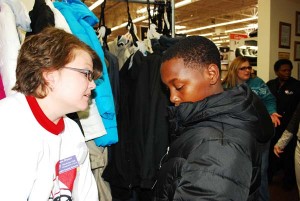 ZIASHOUN GUY, a seventh-grader at Bainbridge Middle School is making sure his coat fits well with help from Dana Bryant of the school system.