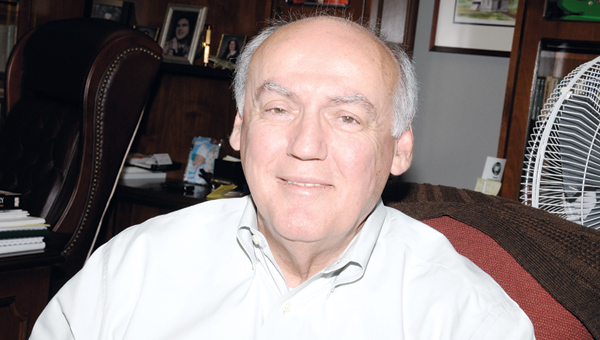 SAYING GOOD-BYE is Bainbridge College President Tom Wilkerson, who has led the college for the last five years. Although born in Havana, Fla., Wilkerson and his wife, Angela, plan to move to Young Harris, Ga., to get away from the bugs, humanity and be near grandchildren and mountains.|Carol Heard

Thursday will be Bainbridge College and the community’s opportunity to say good-bye to retiring President Tom Wilkerson.

A reception honoring Wilkerson and his wife, Angela, will be at the Student Wellness Center beginning at 5 p.m. The reception will also honor other retiring BC faculty and staff, but it is safe to say that the spotlight will fall on Wilkerson.

And as Thursday approaches, Wilkerson said it’s getting a little bit more embarrassing.

“It really is, because I have people say very, very nice things to me at various venues, and I kind of want to say ‘you’re talking to me?’ I wind up saying, and it is so true, ‘I’m really, really lucky that a lot of people have worked really hard to make some good things happen.’ And I truly believe that,” Wilkerson said in an interview several weeks ago.

Just after the interview, the college’s Student Wellness Center opened, exactly two years after the Charles H. Kirbo Regional Center was opened—two significant buildings that have opened under his five-year tenure.

Under Wilkerson, the college’s square footage has doubled, which includes the Early County site that wasn’t part of Bainbridge College when Wilkerson arrived in the summer of 2005.

Fixing Kirbo—which Wilkerson said was the first ever reconstruction and renovating a brand-new state building—and the completion of the Student Wellness Center, which was under budget and within the contract’s time frame, shouldn’t be the only things to mark Wilkerson’s presidency.

“If we had not gotten Kirbo fixed, I don’t really think anything else that we could have done on my watch would have mattered a whole lot. To be honest about it, I think fixing Kirbo enabled some other things, including this wonderful facility here,” Wilkerson said of the Student Wellness Center.

And by fixing Kirbo, Wilkerson said other things were set in motion for the next decade or longer.

“One of them was really simple,” he said. “Before Kirbo, we didn’t have anything taller than a single-story building.”

Another aspect that Wilkerson has overseen was planning for the growth the college has experienced and is expected to experience.

When Richard Carvajal takes over the presidency in January, a foundation has been set for that growth, Wilkerson said.

“We have got to accommodate those students, because if we don’t develop the infrastructure to support that projected number, than what will happen to us is that we’ll have to say, ‘I’m sorry, but you can’t come here. That’s not acceptable,” Wilkerson said.

Wilkerson anticipates the college may receive $1.6 million to $2 million next year for the planning and design of a new academic building, which he said is on top of the Board of Regents priority list and is in the works to be included in the state budget.

Following that phase, construction money of $16 million to $20 million should follow in the ensuing years.

And if Wilkerson were to visit in five years, he said he would like to see not only the completed academic building, but 10,000 square feet added to the library (perhaps as a second floor), which has never been enlarged, and a parking deck to accommodate the growing student population.

Another potential building would be an allied health center on campus. He said 30 percent of BC students are involved in some health-related program and that over time, the program would demand a building devoted to that study program.

Would he like to see Bainbridge College turned into a four-year institution?

In fact it’s not a viable conversation, Wilkerson said.

“It’s not viable because until we get all this construction finished, we’re barely able to serve the students we have,” Wilkerson said. “I don’t think you go about changing the mission of the institution at a time when you can’t meet the current needs.”

When Wilkerson was interviewing for the job, the college and community had a strained relationship.

While he was on his round of interviews—similiar to what the candidates to replace Wilkerson went through this summer—he said he knew there was an extraordinarily good fit between the community and the college, but it had been tested.

As he said in 2005, “there is some feeling of brokenness, some lack of the essential trust you have to have to work with people in the community. That’s got to be addressed fairly quickly.”

As Board of Regent Doreen Poitevint of Bainbridge said, Wilkerson is “a healer.”

“I knew there was some trouble, you had to be an idiot to have missed that. But I have been a little surprised to just how wonderful that relationship is, how wonderful it can be when it’s based on good communication, mutual respect and trust,” Wilkerson said.

Despite the shambles of the Kirbo Center, which Wilkerson said was a nasty surprise when he first arrived, and the strained relationship between the community and former President Clifford Brock, “the real surprise was the wonderful feeling that this community has for this institution,” Wilkerson said.

“When I go around, people never say to me ‘how are things at the college.’ They want to know how things are at our college. Or with our college. That’s just a mindset. It’s a wonderful mindset,” Wilkerson said.

When Wilkerson attended his first Bainbridge College Foundation meeting in October 2005, it didn’t give scholarships and it had $59,000.

In a year, that figure doubled, then it tripled. Now the foundation’s endowment is flirting with the million-dollar mark.

“The secret to the foundation piece is that this college and its students have wonderful stories to tell,” Wilkerson said.

And if there was a time capsule for Wilkerson, it would have to be a disc and disc player that would capture some of the student presentations on what the foundation has meant to them and their education.

“They just share a lot about their family situations and how important the college is to them. That really puts a face on everything that we do—the foundation and the college,” Wilkerson said. “By the end of the day, we are a change agent.”