Union: Warriors is a point of refuge 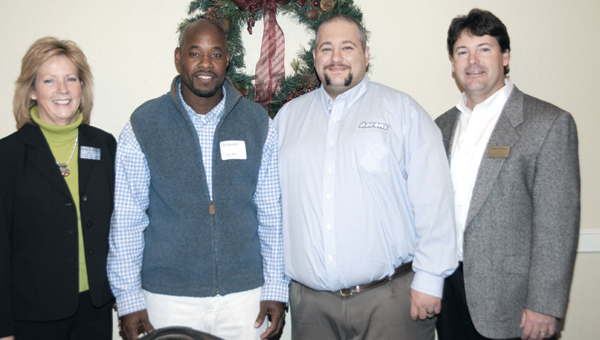 AARON’S AND THE DECATUR COUNTY WARRIORS were the program for Thursday’s Bainbridge-Decatur County Chamber of Commerce breakfast. From the left, are Chamber President Diane Strickland, Nathaneel Union, founder of the Warriors; Benjamin Duncan, general manager of Aaron’s, and Matt Palmer, the chairman of the chamber.|Carol Heard

A relatively new resident of Bainbridge says his program—Decatur County Warriors—is not only about football—its about offering a point of refuge for the area’s youth.

Nathaneel Union, the founder of the Decatur County Warriors football program, told Bainbridge-Decatur County Chamber of Commerce members Thursday during their monthly breakfast that he wants to reach the kids who don’t have parental support.

Aaron’s, which is located at 1400 Tallahassee Hwy., sponsored the breakfast, but turned part of the program over to Union.

Benjamin Duncan, the general manager of the local store, is a corporate sponsor of the Decatur County Warriors and said he has been impressed with the work Union has been doing with the area’s youth.

Union said he has worked with approximately 150 kids who range in age from 5 to 13 years old. The faith-based program has been in existence for one about year.

The Warriors, which is free to each child, has offered football and cheerleading, but he wants to expand it by offering baseball and basketball.

Often times the only thing some kids see are drug dealers, but Union said he wants to instill in the kids to get their education, stay focused and that they can still have a nice car and house, without doing anything illegal.

“I want them to be productive citizens,” Union said. “I know if I give them more of this good stuff, guess what? They will refuse the negative stuff, the bad stuff. That’s what our program is built on.”

It’s not about sports either, Union said.

Duncan also briefly talked about Aaron’s, which he said is more of a furniture store. He said the store does offer lease agreements with the items in its store, but he said the store has competitive cash prices on all those items as well.

Duncan said if local residents or businesses want to assist with the Decatur County Warriors program that they can contact the store at 248-0290 or e-mail Duncan at C1168@aaronrents.com.

The 12-year old Bearcats travel baseball team qualified for the championship of the Travel Ball USA league this past July... read more