Nadine Thomas, who began working as an administrative assistant with the Bainbridge-Decatur County Chamber of Commerce, is being regarded as a success story by the Bainbridge Career Center.

Thomas began working at the Chamber on Sept. 16 as a Georgia Works trainee. She was immediately liked by the staff and members of the Chamber.

Prior to this, Thomas came to Georgia Works after she had worked at Memorial Hospital and Manor as a registered medical assistant. In July, Thomas was laid off by the hospital and came to the Bainbridge Career Center for job search assistance.

Thomas began receiving unemployment benefits on July 21, and from July 21 through Sept. 8, Thomas received re-employment services from the staff at Bainbridge Career Center.

On Sept. 16, Thomas began as a Georgia Works trainee with the Decatur County Chamber of Commerce, and immediately was liked by the employer. So much so that Thomas was hired as a permanent employee of the Chamber on Oct. 13, before completing the six weeks of Georgia Works.

She sees Thomas as a success story of the program.

“It’s a win-win situation for the employer and employee,” Strickland said.

Earlier this year, Strickland was promoted to president, and Kimberly Walden, who was the administrative assistant, was promoted to Strickland’s position of being in charge of membership services and communications.

Thomas, who was born and raised in Bainbridge, quit school at 17 but received her GED about the same time as her graduating class in 1987. She later received an associate’s in medical assisting from Keiser University in Tallahassee and a Bachelor of Science in Professional Administration from Barry University in 2007.

Thomas is a single mother of a son, Reginald, who is going into the U.S. Navy in January; and four daughters LaKetta, who is in U.S. Navy; Brandy, who is studying for a Ph.D. at Ohio State University; Tkeyhah, a sophomore at Fort Valley State University, and LaJenna, a senior at Bainbridge High School. 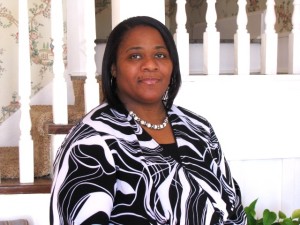 NADINE THOMAS is the Chamber of Commerce’s administrative assistant. Through the Georgia Works program, Thomas was unemployed when she came to the Chamber as a trainee.

[singlepic id=233 w=300 h=225 float=center] The popular Christmas ballet, “The Nutcracker,” will be performed by a talented local cast at... read more