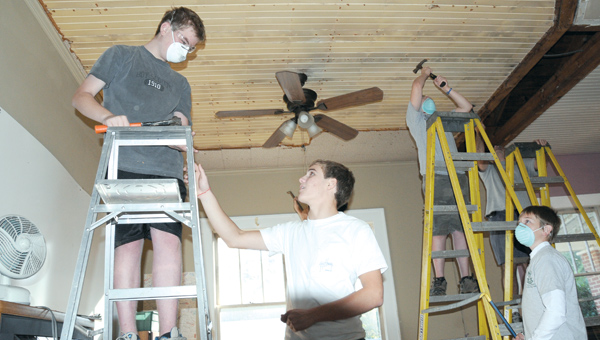 COORDINATING THE RENOVATION project at a house owned by the Friendship House and used by teenage girls as a safe place to go after school is Brent Warr, in the middle without a mask on. Warr was joined by about a dozen fellow Boy Scouts from Troop 502 and their parents.|Carol Heard

Brent Warr’s Eagle project is to help renovate a house used as a type of refuge by teenage girls each afternoon.

Last Saturday, a dozen of Warr’s fellow Boy Scouts in Troop 502 and their parents tore down old ceiling tiles, removed rusty nails, painted, and built a water heater box and a counter for the house, which is located next to the Friendship House of Jesus on Russ Street. 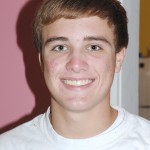 Warr is the 13-year-old son of Woodie and Cile Warr of Bainbridge and an eighth-grader at Grace Christian Academy.

He said his community service project, which is just one element in completing all the requirements for earning an Eagle Scout badge, was chosen because he felt it was a worthwhile project.

His project included renovating several rooms at an older house used by girls 12- to 18-year-olds each afternoon. The house gives them a safe place to go after school to relax, study, do homework and learn about God’s will in their lives, Warr said.

Stone’s Home Center donated most of the materials and Riles’ Flooring was to install new carpet in the den and kitchen of the house.

The parents assisting in the project last Saturday were Billy Walker, Steve Reynolds and Edward Reynolds.