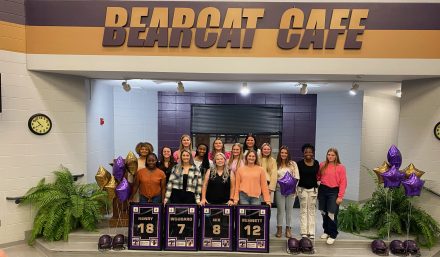 For the high school Lady Cats, the headliner was junior pitcher Brenna Conley earning Region 1 AAAA Player of the Year after an incredible junior season that saw two no-hitters as she led the Lady Cats to a 10-2 region record in 2022.

In 83 innings pitched, Conley finished 2022 with an impressive 2.01 ERA with 135 strikeouts and a 1.05 WHIP while posting a 12-6 record. All season long Head Coach Rex Wade was impressed with Conley’s leadership, work ethic and consistency.

“Brenna is a really unique player,” said Wade in October. “As a coach, players like Brenna don’t come around very often. She’s committed to the game of softball. After practice she goes home and does drills and throws on her own and is constantly working. She lives and breathes softball and her teammates look up to her.”

During the end of the season banquet in November, the Lady Cat seniors got the chance to be together one last time as a team as they were presented with frames that featured their names, jersey number and pictures as something the Lady Cat seniors will be able to take with them on their next chapter.

For the Lady Cats middle school team, many of their players were recognized at the banquet as well as they embody the future of the Lady Cats softball program. Laynie Varnum was named team MVP while Tayden Burris was named Defensive Player of the Year and Mercy Williams was named Offensive Player of the Year. More importantly, Williams also earned the Highest GPA Award as she showed promise both on the field and in the classroom. Kylaha Hughes was also awarded Most Improved while Zy’kiah Donaldson took home the coaches award.

The 2022 season was another season that saw the Lady Cats softball program take another step forward in building a legacy of success as they begin to prepare for more success in 2023.