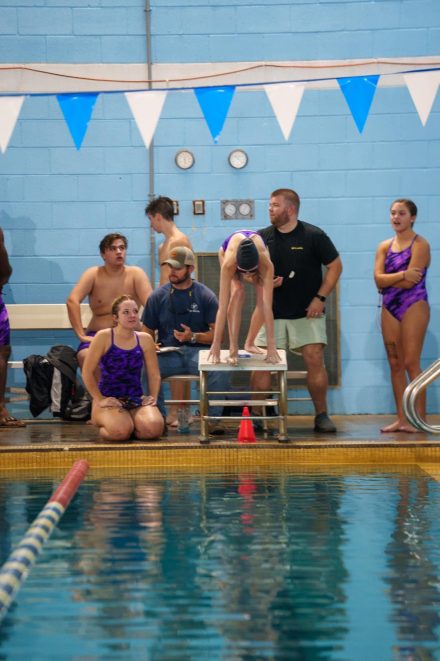 In their most recent meet against Thomas County Central, the Bearcat swim team saw a number of swimmers set personal records, outlast their opponents and gain confidence as they head into the Region Championship meet on Jan. 24.

“The kids are committed,” said Conner. “Obviously family comes first and we want them to spend time with them as much as they can, but at the same time, they know they have to continue to practice in order to get better. I was beyond pleased with their work during the break.”

Conner and his staff have been impressed with a number of their swimmers, but most especially with the strides that his female swimmers have made. Jaycee Maxwell, Ali Bennet, Ramsey Matthews, and Ali-Grace Dickson have all shown a dedication for their sport, and performed the best they have all season in their most recent meet, shattering personal records.

“Ramsey Mathews had one of the best performances I have seen her swim,” said Conner.  “Really her whole medley relay. So Ramsey, Ali Bennet, Ali-Grace Dickson, and Jaycee Maxwell.  Their medley team typically always finished second to TCC but not that night.  They all performed well as a team and got the job done.”

As the Bearcat swimmers prepare for the Region Championship meet, coach Conner and his staff are really pushing their swimmers to go the extra mile and put in the extra work not for them individually, but for the team as a whole. Team success has been an important foundation that Conner has instilled in his swimmers all season, but is putting an emphasis on it in their preparation for the Region Championships.

So the region championship is next,” said Conner. “We are challenging our swimmers to get out of their comfort zones. Really pushing them to compete and become the best swimmers and teammates they can be. Our goal is to win regions of course, but our main goal is to make it a team effort more than an individual effort. I want to give a shoutout to Reese Godby for this.  She is our butterfly swimmer which in my opinion is the hardest event. Last year, I kinda threw it on her. At regions, we are allowed to have 2 girls swim the butterfly, and Reese has made it her goal to help train another teammate to be able to swim it with her.”

The Bearcats are eager to hit the water on Tuesday night as they look to become the third team to claim a Region Championship for Bainbridge High School in the 2022-23 school year.