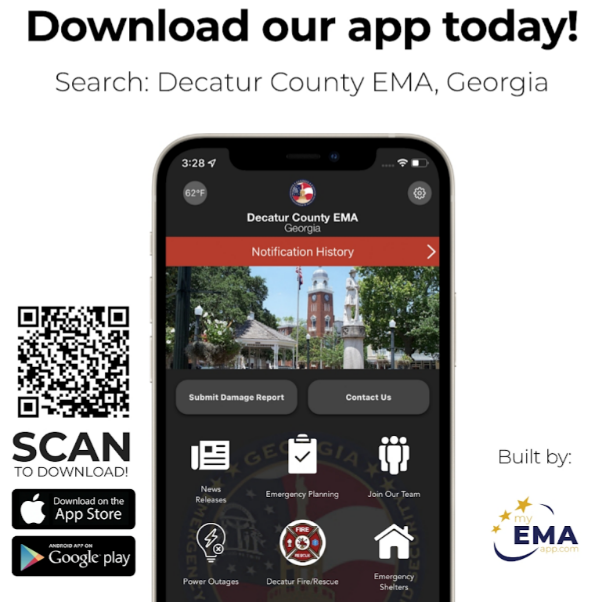 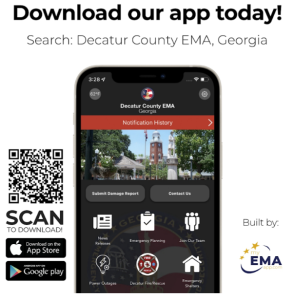 The past 20 years have seen an increase in climate-related disasters and the destruction they cause. It’s become increasingly crucial to prepare for natural disasters, including ones you don’t expect. Georgia regularly faces many types of natural disasters, including hurricanes, tornadoes, severe storms, wildfires, and floods, often resulting in power outages and emergency situations across the state. A growing number of apps on the market give detailed instructions on preparing for natural disasters. However, no matter how prepared you are, the crucial need for timely and local communication could mean life or death to anyone caught out by unexpected conditions.

But now, following months of development and testing, Decatur County Emergency Management Agency has released an Emergency Management System App for public use, which they hope will centralize critical information and play a pivotal role in how county residents make decisions regarding their own safety.

EMA Deputy Director Jamie Earp told The Post-Searchlight that their organization had clear goals through the ideation and development phase of app development and hoped that through widespread use, they’d be able to provide an invaluable resource to the public. “We looked at what the public needed from a proactive perspective; creating this app has hopefully allowed us to put people’s health and safety along with their need to be warned directly into their hands, quite literally,” Earp said. “It’s also allowed other organizations to get information to our residents. For us, putting out clear and concise information in any emergency scenario is of utmost importance.”

The second key feature of the app is that the reach of critical information is extended. “For us,” Earp said, “having the ability to communicate through all of our platforms to everyone within the community is so important. We have the ability to send push notifications across platforms like Twitter, Facebook, or any social media that exists, so we are sure the people that need to know, know.” The National Weather Service currently sends emergency push notifications to phones which many are familiar with. Still, until now, no other emergency response organization in the county has been able to utilize that tech in such a localized manner. But once a public member has downloaded the Decatur County EMA app, they can opt to receive these notifications.

Earp says that having all their information in one location is indescribably beneficial. “We’ve tried to be highly proactive as we developed the app, and we can’t stress the importance of real-time communication and consolidating all the information we have in keeping you and your loved ones safe. As conditions change, we can let you know what we know, along with plenty of additional features and information that is extremely valuable.”

The app features a “find me” feature that records your location within a range of 50ft, even if your cell phone loses power. Other resources such as emergency planning and checklists, shelter locations, job application forms, and damage report links are found in the app.

Earp says they’re particularly proud that the app is ADA-approved, allowing it to be accessible to all of the community, especially the most vulnerable. “We spent a lot of time on accessibility, ensuring that it would comply with rules and regulations,” Earp said. “I think our goal is to build trust and strengthen that relationship between us and those we serve. If we can educate people and maybe even change their perspective by working collaboratively with a product like this app, then obviously we’re pleased about that, and it’s time well spent.”

Earp anticipates tweaks and improvements as use increases, but so far, the feedback has been overwhelmingly positive. The Decatur County EMA app can be downloaded for both iPhone and Android platforms from the app store or by scanning the QR code pictured.