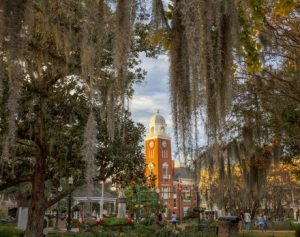 Downtown Bainbridge has become a hub for new busineeses and cultural preservation, earning it the title of an accredited Main Street.

The Downtown Development Agency of The City of Bainbridge held a meeting Tuesday morning to discuss three action items ahead of its regularly scheduled monthly board meeting on Friday.

Attorney Bruce Kirbo took the floor at the beginning of the meeting, asking the board to consider whether the various agenda items they were meeting to approve were within the scope of the DDA mission.  “When it comes to any project, I’d like you first to consider two questions, is the project in the central business district? And secondly, does the project play a role in the rehabilitation or revitalization of that district?” Kirbo’s comments were directed toward two particular agenda items being considered by the board; a lease agreement between the DDA and Southwest Georgia Oil Company, Inc, and a Lease Purchase Agreement being signed retroactively between the DDA and Jacky Grubbs and John Mark Bryant.

According to Kirbo, the city had previously entered into the Lease Purchase Agreement with Grubbs and Bryant; however, the contract violated all applicable laws for multi-year lease purchase agreements. Now Kirbo claims that the contract has been made void rather than amend the original lease-purchase agreement between the city and the property owners by inserting proper provisions and doing the necessary public disclosure.

The board did not respond to or discuss any of the points highlighted by Kirbo during the meeting. Following public comment, the board reviewed the agenda items, all of which were approved, including the motion to sign an identical lease-purchase agreement to the one voided by the city between themselves and Grubbs and Bryant. The same public disclosure laws do not bind the DDA as the city, nor is the DDA subject to the same restrictions regarding multi-year leases or lease purchases as the city.
The Post-Searchlight has reached out to the city for comment.