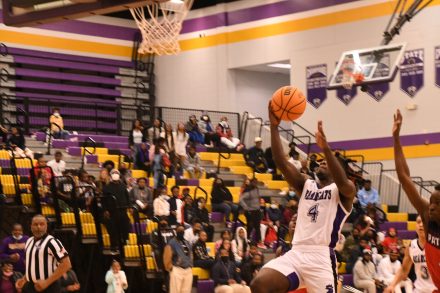 The Bainbridge High School boys basketball team is soaring up the rankings as they have entered the ITG Next Georgia Basketball rankings, coming in at number 25 in the entire state of Georgia. After a nail-biting 53-49 victory against the rival Cairo Syrupmakers, the Bearcats moved to an impressive 19-1 record after 20 games. 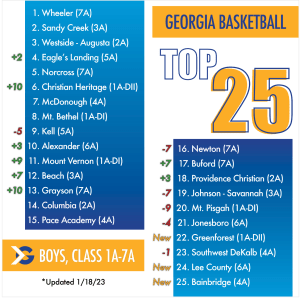 The Bainbridge High School boys basketball team is soaring up the rankings as they have entered the ITG Next Georgia Basketball rankings, coming in at number 25 in the entire state of Georgia. After a nail-biting 53-49 victory against the rival Cairo Syrupmakers, the Bearcats moved to an impressive 19-1 record after 20 games.

A 19-1 start and a top 25 state ranking is an almost perfect start to the season for the Bearcats, but head coach Kelvin Cochran credits that to the leadership among his group and the motivation to redeem their finish to last season.

“I think the guys have done a great job of keeping themselves motivated,” said Cochran. “They came into the season disappointed in the way last season ended and motivated to get to work. We got a good group of guys who have been playing with each other for a while and they want to win a region championship, they want to go far in the state playoffs and it really motivates them. They just want to win. I don’t have to do much to motivate them because they know what the goal is.”

On the offensive side of the ball, the Bearcats are led by senior shooting guard KJ Cohcran who averages 13 points per game on 40% shooting from the field. Alongside Cochran, junior AJ Grant and Ked Bryant have poured in a consistent seven points per game in 2023. For Coach Cochran however, his offense can be carried by different guys each night.

“Personally I would like to see more consistency in our offense,” said Cochran. “Defense is what we’ve been hanging our hat on but offensively we have different guys who can step up on any given night when their number is called upon. When you look at our game stats you can see a multitude of different leaders step up each night. Even outside of scoring we have multiple guys like Dontavious Broadnax who can affect the game and lead us.”

Defensively, Coach Cochran and the Bearcats are aggressive and get after it. Cochran emphasizes the importance of defense each practice and hangs their hat on their defensive identity. Senior Vontrelle Ervin is one of the defensive leaders as he averages around four steals per game and is aggressive on the glass, grabbing five rebounds per game.

“Vontrelle has a huge impact defensively,” said Cochran. “He’s fast, has great hands, is athletic, aggressive and just has great defensive instincts. Defense is something we take pride in and work on every single day. Offensively you’re going to have games that are up and down so it’s really important to be consistent on defense. Our guys take pride in locking teams up which makes me smile as a coach. You have to be able to play defense to play for us.”

A Region Championship is the next step in the Bearcats and Coach Cochran’s quest for a state title. The next two weeks for the Bearcats are an important test for the region standings, with three straight games coming against region opponents Westover, Shaw and Hardaway.

“We want to get a Region Championship first and then focus on a run for state,” said Cochran. “We got some tough sledding today and a big week this week on the road against Westover on Friday and then Shaw coming here on Saturday. We still have some big matchups down the stretch so it’s important that we lock in and stay focused. We preach togetherness and playing for each other. If we keep doing that and play as a team, it will give us some big momentum going forward.”

Something that sets this year’s Bearcats team apart from previous years is the chemistry the players have been able to develop off the court throughout the years. The Bearcats are an experienced team with a number of upperclassmen who are hungry for a shot at a championship.

“This core group has five seniors, a few juniors, and just have been with each other for a long time,” said Cochran. “They’re friends and they play for each other. Their willingness to make sacrifices for each other, they push each other and they just have fun. There’s good vibes all around this team.”

Coach Cochran and the Bearcats have been able to instill a “we over me” mentality and make the sacrifices it takes to see winning basketball. The Bearcats will look for win number 20 on Friday as they travel to Westover and then will return home on Saturday to take on Shaw at home at 5:30p.m.