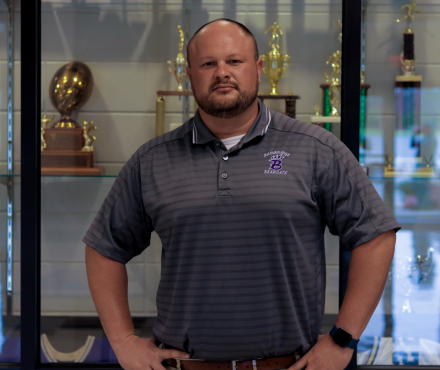 After an extremely successful career both as a BHS wrestler and head coach of the BHS Wrestling team since 2006, wrestling coach Chad Smith has decided to hang up his whistle as he has become the next athletic director and assistant principal at Bainbridge Middle School.

“I have coached BHS for 15 of the 16 years with the lone year being this year as the BMS wrestling coach after having to hang it up due to becoming an administrator and athletic director at Bainbridge Middle School, I just couldn’t do both,” said Smith.

Coach Smith is a Bearcat wrestling lifer as he has not only coached the program to many accomplishments, but was a successful wrestler during his time as a student. When Smith began as the wrestling coach at West Bainbridge Middle School and Hutto, he was also assisting the varsity program in 2006, the wrestling program consisted of eight to ten wrestlers and was not well-known in the community. After his 16 seasons as coach, Smith grew the program to nearly 40 wrestlers at the varsity level and approximately 100 student athletes including junior varsity and middle school while opening the eyes of Bainbridge to the sport of wrestling.

Smith was also a member of the very first wrestling team at BHS and saw immense success during his time. Smith was the first wrestler in BHS history to place in the state finals, and to become a two-time Region Champion. He  was recognized by the NWCA for career wins at the varsity level.

After going off to college, his roads brought Smith back to his roots as he was hired by coach Roy Matthews to become the next coach of Bearcat wrestling and was tasked with building a program.

“After college I came right back home to coach wrestling and was hired by my high school coach Roy Mathews in the 2006-2007 school year starting at the middle school level and assistant varsity coach then took over the program as the varsity coach in 2012,” said Smith. “I have had the pleasure of coaching some of the most memorable young men and women, most of whom I am still in contact with.”

“I have been in weddings, been a part of the birth of their children and still invited to family functions with many of these young men,” said Smith. “We have created relationships that will last a lifetime and for that I am extremely grateful.”

Not only was Smith tasked with building a program, but finding success within the program. During his time as coach, Smith earned 161 wins which is the most in BHS History and  was recognized by the NWCA for his accomplishment. Smith also led his team to the State Elite 8 last year which was a first in school history, 13 Region Individual Championships , 6 of them winning more than one Region Title and has also coached 7 of the 10 State Wrestling Placers in BHS history. Smith has also been featured in ITG Sports Magazine and Bainbridge Living Magazine for growing the sport of wrestling in Bainbridge.

In the 2017-18 season, Coach Smith helped lead wrestler Ryan Adams to the first Wrestling Positive Athlete Award for Georgia. Something that Smith is especially proud of is being able to launch the first AAU Youth Wrestling program in 2018 and also coach the first female wrestler in BHS history. Smith was able to help two wrestlers earn scholarships to compete at the next level which was another first in Bearcat Wrestling history.

Aside from the numerous accomplishments, what Coach Smith values most is the dedication he gave to his wrestlers not only in competition, but in life by building and sustaining relationships. As Smith turns the page on the next chapter of his career, he is especially grateful for the times he shared with his wrestlers.

“Mostly I want to be remembered as a players coach who dedicated his coaching career not to wins and loses but to building personal relationships and character with his wrestlers,” said Smith. “I want to first thank my family for the unlimited support along with all the staff, coaches, administration and parents that supported me along the way in my coaching career. I will miss this sport with all my heart.”