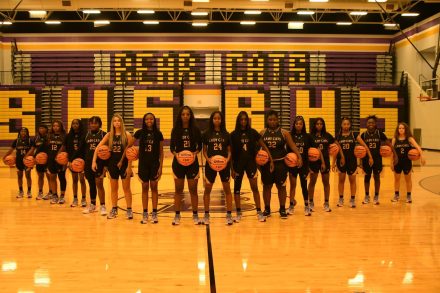 On Saturday, Jan. 14 the Bainbridge High School Lady Cats basketball team and first year head coach Danny Evans picked up their first win of the season as they defeated Seminole High School 44-31. After a slow start to the first quarter, the Lady Cats had a strong second quarter to help propel them to their first victory of the season.

Junior Miyah Williams gave the Lady Cats a boost offensively as she led the team with 11 points on the day. Fellow junior Ahleah Jones is adding to her consistent and impressive 2023 campaign as she also poured in 10 points of her own.

Saturday was Jones’ third game this season where she reached double figures, as she scored 14 earlier in the season against Seminole County and 15 against Shaw.

Sophomore Zamiyah Ofton was aggressive on the glass as she filled the stat sheet, notching seven rebounds, four of which came on the offensive end giving the Lady Cats second chance point opportunities. Sophomore Treasure Jenkins also did a little bit of everything as she finished the day with six points, six rebounds and three steals on the defensive end.

Despite guard Zoe Wells being sidelined due to injury, her teammates have been able to pick up the slack offensively and hold off Seminole County in the fourth quarter, going on a 14-5 run to end the game and seal their first win of the season.

Being able to pick up a win is sure to give the Lady Cats confidence and momentum as they head into the last stretch of their season. For Coach Evans and his team, this season has been focused on gaining experience and developing leadership as his team currently has 16 underclassmen on the roster.

The Lady Cats will travel to Cairo on Friday, January 20 and will not see another home game until Saturday, January 28 as they will host Shaw at 4:00p.m.