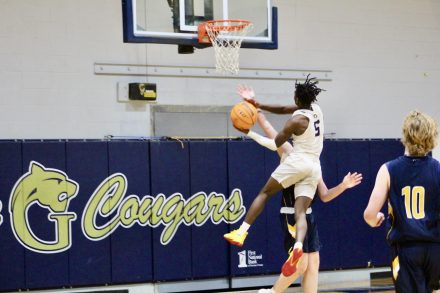 It was a successful weekend for the Grace Christian Academy basketball team as they went 2-0 over the weekend, picking up wins against Fullington Academy and Westwood. These wins improve the Cougars to 9-3 overall on the season as they sit six games above .500 with seven games left in the regular season.

On Friday January 13 against Fullington, the Cougars dominated from the start, as they outscored Fullington 16-7 after the first quarter. Offensively, the Cougars remained consistent throughout the game, reaching double figures in each quarter. In the fourth quarter the Cougars began to pull away as they poured in 17 in the quarter, finishing the game on a 17-8 scoring run.

Offensively, the Cougars were led by Kevin Brooks who scored 21 points on 45% from the field. Brooks also went a perfect nine for nine from the free throw stripe to lead the team. Brooks added eight rebounds, five steals, four blocks and three assists to finish his stellar day.

Corrin McKay also had a productive day on the floor as he poured in 13 of his own points to go along with three blocks, four steals and four rebounds. Keith Edison was dominant on the glass as he collected 15 rebounds, nine of which were offensive rebounds setting the Cougars up with second chance point opportunities.

Offensively the Cougars are among the top in their region as they average 65.4 points per game, while scoring above 70 points in four of their nine wins. Their highest scoring game came against Crisp Academy where their offense erupted for 88 points.

Defensively, the Cougars remain consistent and aggressive which has been a point of emphasis for coach Travis Harrison since the start of the season. In five of their wins, they have held their opponents to under 50 points with their most impressive defensive display coming against Crisp Academy where they held the Wildcats to 31 points.

After a 69-62 win against Westwood on Saturday improved the Cougars to 9-3 overall, they currently sit at an undefeated 2-0 in region play, with also an impressive road record of three wins and only one loss.

The Cougars have a six game road stand coming up but will return home on Tuesday, Feb. 7 to take on Georgia Christian.