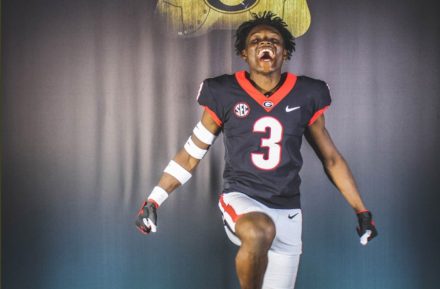 On Friday Jan. 13, Bainbridge High School graduate and former four-star recruit Deyon Bouie announced his commitment to the University of Georgia to play football after spending a year at Texas A&M University.

While at Texas A&M, Bouie appeared in seven games as a true freshman for the Aggies who had a disappointing season, winning only five games but ending the season on a positive note as they knocked off rivals LSU who were ranked sixth overall at the time.

As a recruit at Bainbridge High School, Bouie was ranked #66 in the ESPN Top 300 recruits across the country and the fifth overall recruit in the entire state of Georgia. After initially committing to UGA in 2022, Bouie jumped at the last minute to Texas A&M. Bouie is now back with the Bulldogs and Bainbridge Native Kirby Smart to try and help the Bulldogs win their third straight National Championship.

Bouie will have to compete for playing time however, as Georgia is returning top defensive backs Javon Bullard and Malakai Starks as well as adding four defensive backs in the 2023 transfer portal on top of the six they added in the 2022 portal.

Head coach Kirby Smart has emphasized both the importance of the transfer portal and how important it is to smartly utilize the portal to evaluate every position to give his team the best chance to win games and students the best opportunity to receive playing time in their limited college careers.

“We’ve had successful guys come from the portal, and we’ll continue to utilize the portal,” Smart said earlier in an interview in December. “It would be foolish to think that you could be successful in college football and not evaluate and look through the portal. But you have to be smart in what you bring into your program, especially if you want to keep a dynamic, the culture we like to keep.”

Bouie is expected to begin his journey at UGA this semester as he enrolls in classes and will begin practice in the spring. While at Bainbridge High School, Bouie was one of the most explosive playmakers in Bearcat history, seeing productivity on both sides of the football.

Offensively as a wide receiver, Bouie accumulated 2,181 total yards in three seasons while scoring 18 total touchdowns. Defensively, Bouie saw success as a cornerback accumulating 65 total tackles and an impressive 11 interceptions. On special teams Bouie was able to showcase his speed and playmaking abilities as he returned three kickoffs for touchdowns and accumulated over 500 yards of return yardage.

All eyes are on Bouie as he takes the next step in his journey and aims to help the Bulldogs achieve their third straight National Championship in 2023.