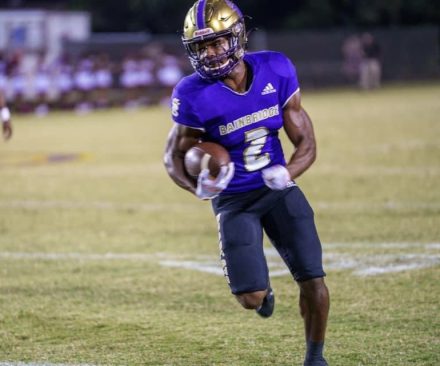 After a junior season that saw Bainbridge High School wide receiver Antavious Murphy fill the state sheet with over 1,000 yards from scrimmage and 17 total touchdowns, Murphy is now receiving notice from colleges at the Division I level.

On December 23, Murphy officially received an offer from Western Kentucky University, a top tier program in the Conference USA who put out NFL talent such as New York Jets quarterback Mike White and New England Patriots quarterback Bailey Zappe. Murphy announced on his Twitter on Dec. 23, making it official that he received an offer.

“After a great conversation with coach Enrique Davis, I’m blessed to receive an offer from Western Kentucky University,” announced Murphy on his Twitter.

After being named Head Coach in 2018, Tyson Helton has built a great program at Western Kentucky as he has accumulated 32 wins since becoming head coach. In 2022 Helton led the Hilltoppers to an impressive 9-5 record in 2022 as they ended their season with a bowl victory, defeating South Alabama 44-23 in the New Orleans Bowl.

Something to note about the WKU football program, is they are one of the best offensive programs in the country. In the last two seasons, the Hilltoppers have averaged over 36 points per game, with 2021 being a historic season as they averaged an impressive 44 points per game.

Not only has Murphy received interest from one of the top offensive programs in the Conference USA, but Murphy also has been shown interest by Georgia Tech University. After earning a spot on the 4-AAAA All-State team, Murphy went on a visit to Georgia Tech in Atlanta this past weekend to meet with coaches and see their facilities.

In an article written by Garrett Chapman of 247 sports, Murphy seemed to have been impressed with what the Yellowjackets had to offer both on the field and in the classroom.

“I got to talk to the coaches and learn more about Georgia Tech and the educational side of the school,” said Murphy on GoJackets.com. “I really enjoyed it. We mostly talked about my film and how I could contribute on both sides of the ball.”

Murphy’s skillset of speed, agility and ball skills are extremely valuable not only to coach Jeff Littleton and the Bearcats but to college programs around the county. Throughout the season, Coach Littleton praised Murphy for his playmaking skills, open field awareness and his dedication outside of the game of football.

“Big time players make big time plays and Antavious is one of our big time players,” said Littleton. “He can do special things with the ball in his hands and so we really try to make it a point to get him the ball in the open field. Antavious knows how we do things here and what we expect. He dedicates himself in the weight room, he’s smart in the classroom and just does everything the right way. Coming into his senior season he just needs to keep doing what he’s been doing and he’ll go far.”

Murphy will spend the offseason competing in different camps, seven-on-seven events, visiting colleges and training for his senior season as he looks to not only propel the Bearcats to another winning season but also earn more Division I offers in the future.