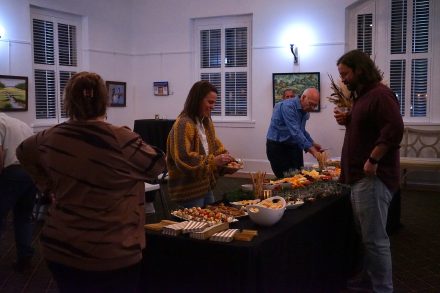 The Firehouse Arts Center provided its 2022/2023 annual report to members at its’ Patron Party.

Members of the Firehouse Art Center gathered at the Firehouse Gallery on Thursday night for the annual Patron Party. Finger foods were provided by Sio’s, with live piano music to accompany the evening. Attendees were also given a small commemorative gift of artwork by Phyllis Lucas, a former member of Firehouse who passed away in 2021.

According to the annual report provided at the event, in 2022, the Firehouse served over 140 children in their after-school programs and summer camps, taught almost 90 classes, and supported 12 artists and teachers. The report also stated that they “greeted approximately 600 people through free public events.” The report also touted the awarding of the first Phyllis and Basil Lucas scholarship to a BHS senior.

As for 2023, the report states a goal of 300 members by the end of the year, as well as increasing their art teacher roster. Upcoming events scheduled for the year include the Sketchbook pin-up, in conjunction with the Bainbridge Jazz and Blues Festival, on February 4; the Father-Daughter Dance, scheduled for February 10-12; the Firehouse Art Gallery Opening Night Rotation on February 24; an art fundraiser featuring Elephant Aid International in March; a John Bayides retrospective scheduled for March 9-25; a documentary and exhibit of work by photographer Paul Kwilecki from April 13-29; and an art show featuring BHS and BMS student art scheduled for May 4-14.

“We’re just very thankful for our board and our patrons,” executive director Jessica Polsky told the Post-Searchlight. “They’re vital to keeping the arts in this community.”