Turning Tragedy into Triumph: The Week of Damar Hamlin 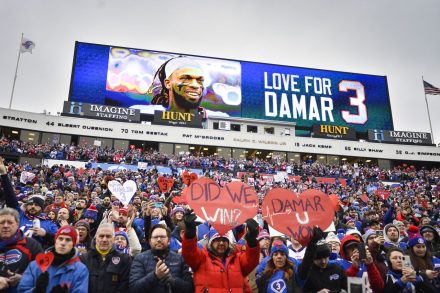 In a week that started off with tragedy and devastation saw millions of football fans and humans rally together in prayer, support and generosity to end the week with joy and hope for the future.

On Monday night January 2, the Buffalo Bills traveled to Cincinnati to take on the Bengals in a prime time matchup between two great teams on ESPN. The game started off with an electric atmosphere and a quick score by the Bengals. You could feel the energy in the stadium through the television as this game had a large impact on the AFC standings going into the playoffs.

The stakes of the game and electric atmosphere was quickly turned into something out of a horror movie as Bills safety Damar Hamlin collapsed on the field after making a tackle. As Hamlin collapsed and medical personnel rushed onto the field, fans and players could tell this was no ordinary injury.

Hamlin suffered cardiac arrest on the field and medical personnel were quick to perform CPR on Hamlin for nine minutes to save his life. As Hamlin was being tended to, Bills and Bengals players made a wall around Hamlin to both pray and provide privacy. Although it was a scary sight, it was also touching to see both sides rally and come together for the good of a human being.

As Hamlin continued to lay on the ground and minutes passed, you could see the shock and heartbreak on players faces. Teammates were crying, holding each other, praying and were in shock. I have never heard a stadium of over 70,000 people sound so silent. There was no way that the game could continue and after a long delay, the NFL canceled the game and it was the right decision.

What came in the following six days turned an absolutely terrifying situation into a coming together of humankind to uplift, celebrate and pray for the greater good of a human being. Stadiums and arenas across America lit up in blue and red Bills colors in support of Hamlin, athletes across all sports wore jerseys, shirts or wrote the number three across their uniforms to display their support in any way they could.

In 2020 when Hamlin was at the University of Pittsburgh, Hamlin started his own foundation called the “Chasing M’s Foundation” that holds toy drives and other events for kids in his hometown. In the coming week, Hamlins foundation saw over 200,000 donations resulting in over $8 million dollars raised for his foundation. Hamlin’s GoFundMe page saw donations from people like Tom Brady, Andy Dalton and Robert Kraft and faces all around sports.

The first few days after Hamlin’s injury felt like the whole sports world stopped. Everyone’s focus was on Hamlin in his health. For a few moments fans weren’t even sure if Hamlin would survive as he battled for his life in the ICU.

As doctors at the University of Cincinnati trauma center worked diligently around the clock to provide the best care to Hamlin, he finally saw a breakthrough later in the week as he opened his eyes and began to speak and interact with doctors and family members. Doctors were thrilled to report that all neurological senses were intact and Hamlin will begin his long road to recovery.

In true competitor fashion, Hamlin’s first question after he opened his eyes was “Did we win”. That response is the ultimate display of how much of a competitor and team player Hamlin is. The doctors responded “You won at life,” after Hamlin asked the question.

As Sunday came around and the NFL saw its first action since the injury, people and players didn’t know what to expect. Would things just go back to normal? Would there be some hesitation? Would players be able to perform after something horrific happened? Well, Sunday was a display of what football means to so many people and how sports can bring millions together for a greater good.

In warm-ups, players and coaches across the league wore shirts and memorabilia that said “Love for Damar Hamlin”. In pregame before kickoff, teams in each game gathered at midfield and prayed together and took a moment of silence to acknowledge Hamlin.

What happened in the Bills game felt like something straight out of a movie. The stadium was absolutely electric and full of love as the support for Hamlin was shown all across the stadium with signs made by fans, displays with flowers outside the stadium and number three jerseys being worn by a number of fans in the crowd.

The last seven days have been a display on why sports are so special. Fans, athletes and people across the world were able to take a terrifying situation and bring people together to celebrate a person and create a goal for the common good. Although it is a long road to recovery for Hamlin, the last week has shed a light on the person that Hamlin is and how much he is loved by so many people.