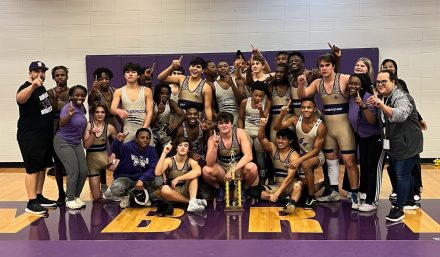 The 2022-23 season continues to be a historic one for Bearcat sports as they rack up records, awards, and accomplish groundbreaking milestones. Most recently, the Bearcat Wrestling team became the first team in Bainbridge history to win a region championship as they took home the title this past weekend.

Led by head coach Paul Coleman, the Bearcats marched into the region tournament at home after a season of a long travel and grueling schedule. Despite the countless hours, his wrestlers were able to stay focused and remain centered on their competition. Coleman is especially thankful for the dedication that so many people put into his program to help become the best.

“It is amazing and exciting that we were able to win the Region,” said Coleman. “To be the first ever Bearcat Wrestling Team to accomplish this goal is special. I am extremely proud of all the wrestlers. This is more than a team win. What I mean by that is we couldn’t have done it without every person that is on the team and every person that is in the background. I am thankful for the support that I have had from the High School Administration, the bus drivers that take us to the competitions, the police that travel with us and stay on campus to protect us, the parents/guardians for putting up with all the crazy hours and traveling that was/is needed, my assistant coaches, and most importantly my family. There has been a lot of hours put into this team being the best they can, and I can’t thank every single person enough.”

The Bearcats experience in traveling and competing in meets dating back to the summer helped them especially in their most recent competition. The upperclassmen displayed qualities of leadership and experience that propelled the Bearcats to their first ever Region title.

“Our goal of a region championship started in the off season,” said Coleman. “We have grinded out a lot of hours conditioning and traveling to competitions. We had one event this past summer that was a five hour bus ride to, all day there, and a five hour bus ride back. The experience we gained from that, outweighs the traveling time. That is what this program needs, experience. Experience is what we are getting this season, and the wins we collect along the way are special.”

For Coleman and his squad, a highlight of their season was having the opportunity to host their very first home meet in the Bearcat Invitational. Being able to hold the Bearcat Invitational not only gave the community a chance to come out and watch the wrestlers compete, but it also gave them the opportunity to showcase their skills to other programs across the state of Georgia.

“The most exciting part of the season has been our home tournaments,” said Coleman. “With these home tournaments/events, we have opened the eyes of Bainbridge to what wrestling can do for the community. It made it easier for our parents, guardians, teachers, and community members to witness a historic sport live. I credit the success and comradery we have built up this season to the wrestlers and my assistant coaches. We have emphasized that we are not only a team, but we are a family. A team/family can only go as far as the members of the team/family allow them to.”

A big key to the success that the wrestlers have seen is their ability to both stay committed to each other and develop a culture based upon family, accountability and success.

The season is not over for the Bearcat wrestlers however, as they have the Elite Eight and State Qualifying tournament coming up this weekend at Bainbridge High School. Coleman has challenged his wrestlers to mentally “lock in” and put another trophy in the trophy case.

“The next step for the team is to continue to feed our hunger to win by being competitive in practice and doing what our team slogan states, lock in.” said Coleman. “If we can ‘lock in’, our second team goal is very obtainable, win this upcoming State Qualifier and return to the Elite Eight. From there the last team goal will be tough, but very much obtainable. The last team goal is to place in the top four of the state; To get a Final Four trophy and finish would be amazing.”