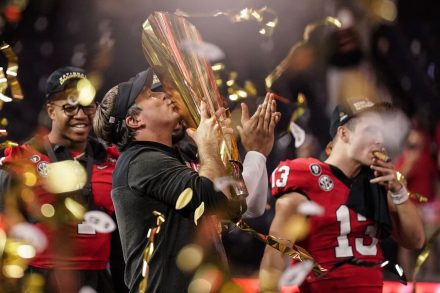 The night of January 9 will forever live in glory for Georgia Bulldog fans across America as Bainbridge native and head coach Kirby Smart led UGA to their second straight National Championship, becoming the first team since Alabama in 2012 to go back-to-back.

Georgia also became the first team since the institution of the College Football Playoff format to go back-to-back and joins an elite lineup of USC, Nebraska and Alabama as the only teams to repeat as Champions.

It was a night of celebration and no stress for Bulldogs fans as Georgia completely dominated the TCU Horned Frogs 65-7, the largest margin of victory in National Championship history. Offensively, defensively, and special teams the Bulldogs stuck to their game plan and characteristics and showed why they have been the consensus number one team all season long.

The Bulldogs opened up the scoring in the first quarter with a methodical four minute drive that featured a heavy dose of the run-pass option. Quarterback Stetson Bennett got the Bulldogs on the board first after he faked a handoff and took a carry 21 yards up the left side into the end zone for the score.

The defense got into the action shortly after as TCU wide receiver Derius Davis fumbled the ball and Georgia cornerback Javon Bullard came up with the ball, setting the Bulldogs up in prime field position. Kicker Jack Podlesny knocked in a 24-yard field goal to give Georgia a quick 10-0 lead.

TCU wouldn’t go away easy however in the first quarter as the Horned Frogs responded with a drive of their own. A 60-yard completion by quarterback Max Duggan put TCU inside the red zone. A few plays later Max Duggan called his own number and took a carry into the end zone to pull TCU within three.

Many thought that the response by TCU was a sign of what was to come, but Georgia continued to stick to their game plan and stay disciplined and rattled off four straight touchdown drives. Kirby Smart’s mission coming into this game was for their defense to “hunt and get after the ball”, and they did just that.

Two first half interceptions by the Georgia defense set the Bulldogs up in prime field position as their offense was able to capitalize with touchdowns, including an incredible 22-yard one handed catch by wide receiver Adonai Mitchell to give Georgia a 38-7 lead going into halftime.

The domination continued in the second half as the Bulldogs exploded for four more touchdowns as Georgia scored a record-high 65 points. In his last game as a Bulldog, Stetson Bennett threw for an impressive 300 yards and four touchdowns while also rushing for two touchdowns on the ground.

Before the game head coach Kirby Smart addressed his team and told them to leave no doubt and the Bulldogs did just that against TCU.

“We wanted our kids to play aggressive and without fear and dominate,” said Smart to ESPN reporter Molly McGrath just seconds after the clock hit zero. “All year I have been telling our guys that we are the hunters. We’re not getting hunted. We only got one more chance to hunt and we did that tonight.”

Not only was it a special night for Bulldog fans, but a special night for all of Decatur County as Kirby Smart, a Bainbridge High School graduate, cemented his legacy as one of college football’s elite. Smart and his family roots go back to Bainbridge as not only did Kirby play and graduate as a Bearcat, but his father Sonny also served time coaching at Bainbridge High School. Decatur County takes immense pride in supporting Smart and last night was one to remember for families across the area.