Georgia and TCU Meet for a Showdown in LA 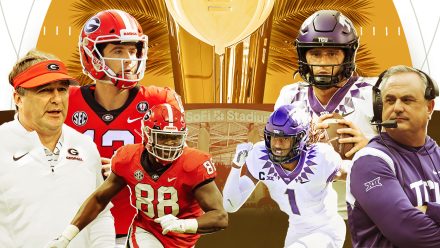 Well Georgia fans, TCU fans, and college football fans; you finally made it. The National Championship is here. After a long season with teams moving up and down the rankings, a conference championship weekend that almost saw teams’ championship hopes vanish and a CFP Semifinals that was probably the best since the inception of the playoff format, we are down to the final two teams. At the beginning of the season most people probably would’ve expected the Georgia Bulldogs to be taking the field at SoFi stadium on January 9, but not many would have been able to picture the TCU Horned Frogs to be on the opposite sideline. Nonetheless, Georgia and TCU will duke it out on Monday Jan 9 in Los Angeles at SoFi Stadium.

This year’s College Football Playoff Semifinal games were the most competitive and entertaining games since the start of the playoff format in 2014. To open New Year’s Eve, the Big 10 Champion Michigan Wolverines took on an underdog TCU Horned Frogs team led by first year head coach Sonny Dykes.

I will be the first to admit I have been doubting TCU all season. Not having any dominant, quality wins and losing the Big 12 Championship to a three loss Kansas State team really made it difficult to justify them being among the top four and made it difficult to pick them. All those doubts went away within five minutes into the first quarter against Michigan.

To open the game, Michigan running back Donovan Edwards busted through the middle and rushed for over 50 yards to set the Wolverines up inside the red zone. However, TCU’s defense reset themselves and was able to hold Michigan on 4th and goal on the goal line and give their offense the ball back.

The next time Michigan had the ball, TCU’s defense came up big once again and intercepted a JJ McCarthy pass and took it all the way to the end zone to take their first lead of the game. The first half was total domination for TCU and quarterback Max Duggan as they went into halftime with a 21-6 lead.

I think the only way to describe this game was weird. There were so many weird things that happened in this game that you only see in backyard football or in video games. Two pick-sixes that were tipped into the air, a goal-line fumble by Michigan, and over five plays that went for over 50 yards.

One thing that makes TCU dangerous is the way that they were able to overcome adversity. In the second half Michigan’s offense began to click as wide receivers Roman Wilson and Ronnie Bell made big plays to bring Michigan within striking distance at 41-38.

TCU’s biggest play came immediately after Michigan cut the lead to just three as TCU wide receiver Quentin Johnston caught a slant route on third and seven and ran past Michigan’s defense for a 76-yard touchdown. TCU held on and advanced to their first National Championship in a battle for the ages against Michigan.

If you are a Georgia fan, one thing to take away from this game is that TCU knows how to win and they have done it all season. They can win in many different ways even if it’s not pretty. They have weapons like Heisman candidate Max Duggan along with running back Emari Demercado and wide receiver Quentin Johnston. TCU seems like a team of destiny and should not be taken lightly.

Just when you thought that the day couldn’t be better, Georgia and Ohio State responded with a battle of their own. Despite a first quarter touchdown from Kenny McIntosh, the Bulldogs found themselves in a deficit of their own as Ohio State quarterback CJ Stroud and wide receiver Marvin Harrison Jr had the game of their lives as Stroud threw for 348 yards and four touchdowns, two of them to Harrison.

Georgia’s hopes seemed slim as they headed into the fourth quarter down 38-24. Head coach and Bainbridge native Kirby Smart was able to light a fire under the Bulldogs and pull them from the grave. With eight minutes left in the quarter, the offense injected life into the team as quarterback Stetson Bennett found Arian Smith for a deep 76-yard touchdown making it a three point game. After an Ohio State field goal, Georgia drove down the field as Kenny McIntosh took a ten yard screen pass to the end zone to take a 42-41 lead with 54 seconds left.

Like TCU, Georgia knows how to win and finds a way to get the job done. Georgia is extremely experienced and well coached which is extremely important in Championship games. I think both teams matchup extremely well. Georgia has the better defense but TCU has the better offense. Georgia being favored by 13 points is a massive stretch. TCU has beaten the spread in almost every single game this season and sports bettors despise TCU because of this. The team of destiny meets the team of the year for a chance to win it all.