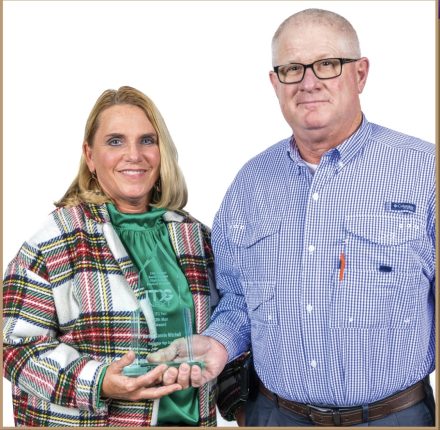 The holiday season often spotlights the season of giving and many people look to give all they can to help others and put smiles on faces. For Bainbridge natives Mark and Connie Mitchell, acts of service are a daily occurrence. On Wednesday, December 16 Mark and Connie Mitchell were awarded with the ITG Next 12th Man of the Year Award. The 12th Man Award highlights people who devote time and service to helping programs in any ways they can.

The Mitchell’s are extremely involved with the Bainbridge High School touchdown club which is a program that helps the athletes at Bainbridge High School with things such as fundraisers, equipment, team meals and more. Head Coach Jeff Littleton has seen the Mitchell’s impact on the program since he started as head coach and is always grateful for the service and support they show the football program.

“They are super supporters of Bainbridge Bearcat football,” said Littleton. “They have been involved with the TD Club in some capacity for 10 years since I have been Head Coach. They have been the driving force of our organization for the last seven years. The Mitchell’s take care of everything from fundraisers, the football program and food for the athletes. They have not had any relatives involved in three years and still maintain the workload. They cook and serve food to the football team every Wednesday during football season and serve the athletes gatorade drinks after each game, while both maintain their day jobs. They coordinate every banquet and event that we have to support our football program. They are such an integral part of the success of our football program.  The Mitchell’s are always willing to give an extra hand.  They truly make our jobs as coaches much easier and have helped raise the standard of excellence in everything we do.”

The Mitchell’s first became involved with the Bearcat football program in 2013 when their sons Ben and Brad began playing. As they began to be involved, they saw the community that the program had and also saw what Littleton was building and wanted to help out in any way they could.

Although the Mitchell’s do so much to help the program, they credit it to the leadership they have been able to follow and the incredible community that Bearcat football has built over the years. The Mitchell’s goal is to make Coach Littleton and the players’ lives easier so that Friday nights can be focused on football.

“We had very good leadership to follow, and we just jumped in and helped as help was needed,” said Mark Mitchell. “The Touchdown Club is involved in various fundraising programs that are used to generate the money needed to support a successful football program. We work very closely with the different sponsors who are generous to give to the football program. Connie supervises and works diligently to develop the Program that is printed each year.”

Not only do The Mitchell’s devote countless hours and money to serve the Bearcat football program, the Mitchell’s serve others everyday at their day jobs. Connie works at the Auburn College of Nursing, devoting herself to taking care of patients in need.

“It has always been our goal to serve others,” said Mitchell. “We are blessed to have the opportunity to serve with the Bearcat Touchdown Club, hopefully positively impacting those for whom we serve.  To see positive outcomes and results from that service is most rewarding.  Although it may appear that the Bearcat Football Program is the beneficiary of our service, I can assure you that we are the beneficiaries of the greatest blessings that come from being a part of this outstanding football program.  It is truly an honor to serve these coaches and this football team, and we just appreciate Coach Littleton for allowing us this opportunity and for trusting us to do part of what is needed to help this program be successful.”